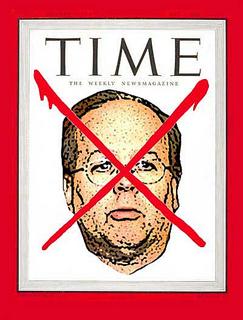 If I was to speak to my conservative brother-in-law, which I haven’t done in over a year, perhaps the following would benefit me in an argument against Rove. THERE IS NO RATIONALIZING WITH A CONSERVATIVE!

Everything you need to fight back against the right-wing misinformation campaign.

FACT: White House Has Repeatedly Commented During the Ongoing Investigation
McClellan had previously cited that same investigation and then gone on to answer the questions as they pertained to Rove. For example, on October 1, 2003, he said, “There’s an investigation going on … you brought up Karl’s name. Let’s be very clear. I thought — I said it was a ridiculous suggestion, I said it’s simply not true that he was involved in leaking classified information, and — nor, did he condone that kind of activity.” Similarly, on October 10, 2003, McClellan said, “I think it’s important to keep in mind that this is an ongoing investigation.” But he then added with regard to a question about Rove’s involvement, “I spoke with those individuals, as I pointed out, and those individuals assured me they were not involved in this.”

CLAIM: Rove Didn’t Leak The Name So He’s Not Guilty
Rove: “I didn’t know her name and didn’t leak her name.” Rove attorney Robert Luskin said “he did not tell any reporter that Valerie Plame worked for the CIA.”

FACT: National Security Law Says Identifying Covert Agent Is Illegal
Rove at the very least identified Plame as “Wilson’s wife.” Under section 421 of the Intelligence Identities Protection Act, the disclosure of “any information identifying [a] covert agent” is illegal.

CLAIM: White House Didn’t Push The Story
Rove’s lawyer Robert Luskin claims Cooper manipulated what Rove said to him “in a pretty ugly fashion to make it seem like people in the White House were affirmatively reaching out to reporters to try to get them to report negative information about Plame.”

FACT: There Was An Organized Campaign To Push Leak Info
First, Robert Novak admitted: “I didn’t dig it out [Plame’s identity], it was given to me…. They [the White House] thought it was significant, they gave me the name and I used it.” Second, Rove told Chris Matthews that Plame’s identity was “fair game.” Third, Time magazine reported the orchestrated campaign against Wilson in October 2003: “In the days after Wilson’s essay appeared, government officials began to steer reporters away from Wilson’s conclusions.”

CLAIM: Conversation Was About Welfare Reform, So Rove Didn’t Do Anything Wrong
National Review’s Byron York: “According to Luskin, the fact that Rove did not call Cooper; that the original purpose of the call, as Cooper told Rove, was welfare reform.”

FACT: What They Spoke About Was Irrelevant
The original purpose of the conversation between Rove and Cooper is irrelevant. It has no bearing on the fact that Rove did identify a covert agent during that conversation.

CLAIM: Plame Wasn’t An Undercover Agent
Ed Rogers, former official under Reagan/Bush: “I think it is now a matter of established fact that Mrs. Plame was not a protected covert agent, and I don’t think there’s any meaningful investigation about that.”

FACT: Former CIA Officer Who Worked With Plame Verified She Was Undercover
Larry Johnson, former CIA officer: “Valerie Plame was a classmate of mine from the day she started with the CIA. I entered on duty at the CIA in September 1985. All of my classmates were undercover–in other words, we told our family and friends that we were working for other overt U.S. Government agencies. We had official cover.”

CLAIM: Rove Was Trying To Correct A False Story
Rove attorney Luskin added, “What Karl was trying to do … was to warn Time away from publishing things that were going to be established as false.”

FACT: Wilson Was Right, Bush Was Wrong
Bloomberg recently reported, “Two-year old assertions by former ambassador Joseph Wilson regarding Iraq and uranium, which lie at the heart of the controversy over who at the White House identified a covert U.S. operative, have held up in the face of attacks by supporters of presidential adviser Karl Rove.”

CLAIM: Wilson Lied About His Trip To Niger
Former Rove deputy Ken Mehlman: “What Joe Wilson alleged was that the vice president, then he said the CIA director sent him to Niger.” [CNN, 7/12/05]

FACT: Wilson Never Said Cheney Personally Sent Him To Niger
Bloomberg reported, “Wilson never said that Cheney sent him, only that the vice president’s office had questions about an intelligence report that referred to the sale of uranium yellowcake to Iraq from Niger. Wilson, in his New York Times article, said CIA officials were informed of Cheney’s questions. ‘The agency officials asked if I would travel to Niger to check out the story so they could provide a response to the vice president’s office,’ Wilson wrote.”