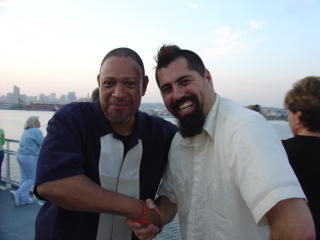 I just returned from five days in San Diego. I attended the National Academy Foundation’s 21st Annual National Conference. It’s in a different city every year. Last year New York, next year Detroit. This was my first time. I am the on-site coordinator of a NAF sponsored academy at my high school. I am developing an Academy of Information Technology at Balboa High School in San Francisco. NAF supplies some curriculum ideas, resources including advisory boards, fundraising ideas, and conferences to gather and discuss.

The conference was amazing. My wife and I flew down with our nine month old daughter (her first flight, what a great little flier) on saturday night. Early morning keynote speakers, followed by morning and afternoon workshops filled the agenda. As I attended the conference Alison took little Lauson Kai out and around the city. Nice city. We went on a harbor cruise with the NAF attendees on tuesday night. Excellent time. I was a bit surprised by the humidity in San Diego.

I attended workshops on how to plan a student conference (I advise the student government at my school), how to write a grant, how to build a successful team, and brainstorming sessions where teachers gathered together to discuss best practices.

At times I and Joel from Galileo high school felt that we were the only ones offering any good ideas, but after a few sessions people began opening up more. I truly enjoyed the brainstorming sessions. I left with a great amount of knowledge, as well as wonderful connections to great educators.

I met some great people there. Thanks to the whole gang of NAF folks who put this show on. Big thanks to Daniel, regional director for the Atlantic coast. This guy is great. We really hit it off. This is a really wonderful organization. They truly empower educators and recognize that even though the achievement gap has closed in elementary and middle schools, high schools haven’t budged in over twenty years. NAF is working to change that.

Check out there site here.

No Comments on What a Trip

Wow, I was looking through the wonderful new Google maps site, and, of course, since I’ve moved over 25 times in my life, I fiqured I would check out old neighborhoods. I was born in Toledo, Ohio. I haven’t been there since I was 10 years old. My family moved to southern California in February of 1981. Here’s a link to the elementary school I attended for fourth and half of fifth grade. I lived down the street, directly across from Westwood Park. That was the best house I ever lived in.

As a matter of fact, my father, what a great guy he is, always said that he wished we never moved away from that house. It was a very cool place. The backyard was a half acre, included a half basketball court and a sunken back part of the yard, which would flood and freeze during the winter, allowing us to skate on it and play ice hockey. Damn! I miss that house.

No Comments on Google Maps Rocks