Machine Gun in the Clown’s Hand 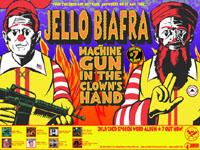 Wishing you my best 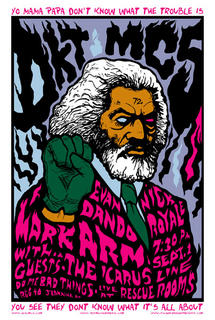 Although we have only spoken on the phone once, I regard you as a friend. Has this ever happened to you before? Me either. when I ordered that MC5 poster from you, I figured it would be sent, I stuff it away somewhere until I had the funds to frame it (sometime in 2015) and that would be that. But no! Instead it never got to me. I emailed you…emailed you again. You emailed me saying that you sent me three previous emails and that you only received one of mine. It went on like this for a few weeks. A few more lost emails here and there between the two of us, and then you got the smart idea of asking for a phone number exchange.

After three more lost emails between the two of us, I get a phone call from you. All I expected was a brief business conversation. What I got was beautiful, man. A twenty minute conversation about the fine art of silkscreening, how to get the band you love to allow you to make a poster for them, family ( I hope your daughter and wife are safe), and of course, talk about Hurricane Katrina, never once thinking about “what if it happened here”. Now it’s happening here…or should I say there. You live in Houston.

I still have yet to receive the poster, but what I’m most concerned about is the safety of your family. San Francisco may appear to be a world away from Texas and Lousiana, but in our hearts you are right next door.

Be safe, and be certain that you will survive and thrive. And when I do receive your fabulous work in the mail, you can bet it will be the next one framed and up on the wall. Even if that is in 2015.

I’ve been a bit busy lately with school beginning. I’m a high school teacher, and the year has just begun. We’re in the third week of the term, and my schedule continues to change. More on that in another post, I’m sure.

I teach, or should I say taught, as of today I don’t teach Media Literacy anymore. Anyway, I have taught Media Lit at the high school level for about a year. I have my degree in it, and I want to impart to the kids the imporatnce of not being duped by mainstream media.

Below you will read an amazing story of a non-New Orleans resident, as a matter of fact, a non-American resident, stuck in N.O. during the hurricane, and her experience with local law enforcement.

I ask, who’s to blame for the way these people were treated? The local law enforcement feared mob mentality, while all these people wanted was to get the hell out of Dodge.