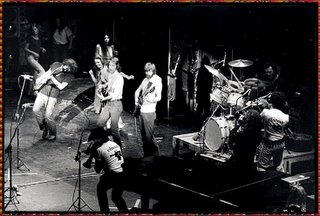 I’ve been a Deadhead since I was about 12 years old, back in 1982. My father bought “Skeleton’s From the Closet” and I just fell in love with the band from that moment on. I didn’t attend my first show until 12-30-85 (first Mighty Quinn btw), and I was truly on the bus forever. Today, I always carry at least one show in my cd case, one never knows when the opportunity will arise to listen to favorite gem through their 30 years.

To see my catalogue of live music check out my list on etree.
So, when the Live Music Archive (LMA) began uploading Grateful Dead shows a couple of years ago, I was more than stoked. I, like so many others around the globe, began furiously downloading all those tasty bites from shows we had only read about in Deadbase, or seen on others lists for so long. I had collected/traded tapes since 1985, and I have over 1000 hours. When LMA put the Dead up, I had a pretty repectable collection on CD, but I truly took full advantage of what they had to offer.

What did they offer? Not only the shows themselves were available in soundboard or audience, but also a place to comment about the show. Whether you were there, and wanted to share what it was like when Jerry grinned after singing “test me, test me. Why don’t you arrest me?”, or you’ve had this show on tape for 20 years, and thank the good gods for LMA.

The day before Thanksgiving, the Dead decided to pull all of the soundboards off of LMA. They haven’t, as of today, stated their reasons for this. Many are calling the Dead greedy. I consider these people to be the one’s who showed up for the shows just to hang in the parking lot, never intending to go inside. You ruined the scene, btw.

I think the Dead have generally been poor businessmen through the years, and they know this. They have trusted many people, from Mickey Hart’s own father, Lenny Hart, who robbed them of thousands of dollars, to Ron Rakow, who had bad ideas, and also bilked the band out of much hard earned money.

After Jerry died, it was obvious the band as a business would have to downsize. And downsize they did. Today they don’t tour as much. They live off of royalties (they sure didn’t have much luck with their studio albums), and of course anything they make off of the road, after the over head is paid.

If the band wants to keep the soundboards off of LMA so they can package them themselves, it’s their right to do so as the intellectual owners of the works. Yes, Jerry said many times once they’re done with it, it’s ours. But the band needs to survive into their old age as well. They recently laid off more GDP employees, including Ram Rod, one of the original roadies from 1965. That was not an easy decision to make.

One thing that disturbs me though is what GD publicist, and acquaintance of mine, Dennis McNally said regarding the trading community. He didn’t see LMA as a community at all, just the high powered internet allowing folks to horde as much music as they can, as fast as they can.

I disagree. I did enjoy the idea of searching people’s lists and making the trade, and going to the post office too, but i see little difference with what LMA offers. If LMA didn’t offer the an area to discuss each show, then perhaps Dennis has a point, but this is an area where we can all get together and SHARE the music. The band does not exist anymore. The technology of today dictates that we will move at a faster rate. To disallow the music to be shared in this way is to only postponing the inevitable.

I miss seeing the boys live. I love pulling out a show from any era and being magically transformed to that place above the clouds, where only the Grateful Dead can take me. The trading will live on. The band can package all the music they like. Some will purchase it. Others will boycott it. Either way, as Jerry told us, “Once we’re done with it, you can have it.”

We’ll take it any way we can get it.