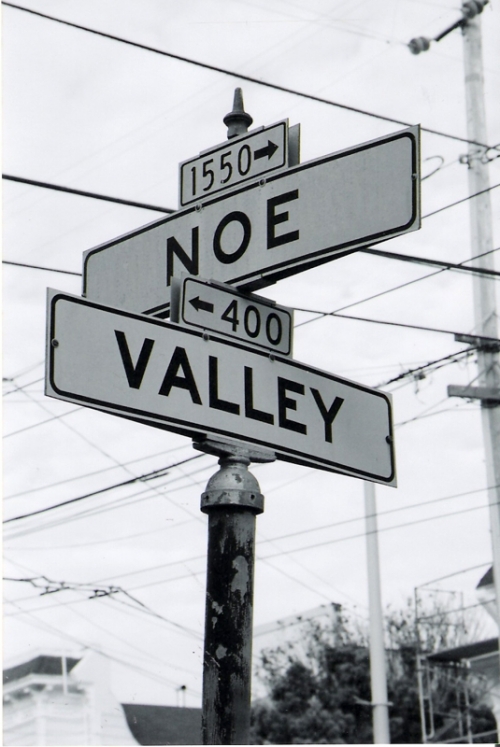 OH, a gazelle just jumped in front of me! Even their dangerous disregard for traffic does not distract from the beauty of bouncing blond ponytails and long legs prancing by. She has not yet entered her breeding season, just imagine her pushing a $695 3-wheeled baby stroller in a few years. Bet that will turn her athletic prowess into entitled rage.

Now behind a MUNI bus waiting to dock behind the GBUS, YBUS, GeneBUS, eBUS. I know, I know... without those tech buses, all the coffee shops would be overrun with Software-Americans fighting over bandwidth. As is, they clear the streets of the Walking Wireless, those sad pre-millionaires addicted to good signal. I bet one of them will make an app today.

Crossed over Sanchez, almost half way until the turn to my daughter's fog-enshrouded day camp. Now stuck behind the line of snails entering Whole Foods. Must stop clenching teeth. At least I can look at the exceptional children's shops selling Baby Hawking Quantum Blocks and My First Hadron Collider. Ever since the last Latino family was priced out of San Francisco, Noe Valley has adopted the unstoppable cry of "THINK OF THE CHILDREN (by which I mean THINK OF MY CHILD AND THINK OF ME!!!)". Yes, Welcome to The Life Vicarious.

OK, reached the last coffee shop at Douglass, trying to make the turn around the triple-parked BMW, blocking the double-parked Mercedes, which has cornered the Tesla in the bus stop. It's ok, they're just getting a cup of coffee. OK a double-shot espresso mocha with fat-free goat cream and shaved truffles. "I"LL JUST BE A MINUTE!" says the man in the $6000 suit. Hey, he spoke to me politely, I've been validated!

... and I made my turn, putting the living hell on Earth that is Noe Valley at 8am behind me. Now I can look forward to tonight's FINAL BROADCAST of NOSE HAIR LINT LANDRU, with Karen Carpenter, KrOB, Puzzling Evidence, 2- Minute Dance Party, Report from the Comptroller and Sherilyn Connelly. It's sorta been worth the struggle, isn't it?