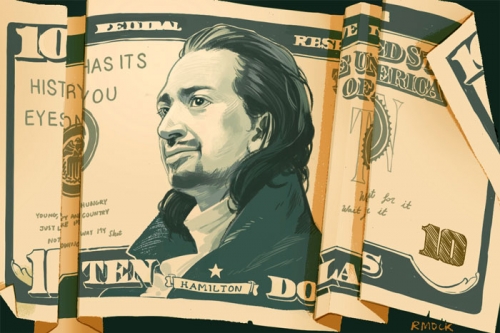 NOSE HAIR LINT HAMILTON, An American Podcast
November 29, 2016 8:00pm
download | chatroom
Nose Hair Lint Gland
NOSE HAIR LINT HAMILTON, An American Podcast
Nose Hair Lint Gland NOSE HAIR LINT HAMILTON, An American Podcast
You would have no problem recognizing the Republicans of 1800. Wealthy landholders who dominated the South, demanding "states' rights", only land owning Caucasoid men voted, imposed slavery of fellow man, demanded the smallest government possible, tried to replace the national army with local militias, cutting taxes (especially on whiskey), refusing to accept opposition appointments to the Supreme Court and standing up for the "common man". Sure. Noteworthy Republicans such as Thomas Jefferson advocated for these "yeoman farmers" as the backbone of the agrarian ideal he envisioned, yet these suckers were by and large subsistence farming on small plots, never to see the benefits that went to their wealthy slave-driving neighbors. The Republicans opposed a common currency and advocated for the national government to default on the debt obligations. Indeed, a very precarious position of extreme danger for our young country, how in the world did we survive the corruption, hypocrisy and moral depths of a Republican government dominated by the deplorablest of men?

In short, no one knows, but it may have something to do with that hip hop musical on Broadway. You know, the play where for $750 you can watch gay, minority theater kids learn you real good about our complicated history? Why it's a history lesson that Karen Carpenter and Sherilyn Connelly are guaranteed to exploit on this special 4 hour FINAL BROADCAST of NOSE HAIR LINT GLAND. That's right. We're going for perspective, 'cause shock, anger, denial and bargaining have not worked.