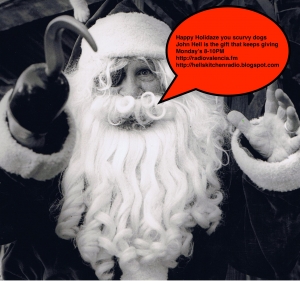 Anyway, I start the second hour with eight tracks used to sample "Egg Man" and then follow it up with said Beastie Boys track. I'll be doing this for each of the tracks on this classic LP in the weeks to come. Tune in and enjoy.

I also took this holiday show to share some longer and stranger tracks as you can see from the playlist below. I picked up a couple of James Brown/JBs LPs this past week, as well as some 80s and 90s punk 7"s . I also close out the show with a few live cuts that I think are worthy for your ears. If you're playing the LDB game (and why would you?) then you better stop following the Abbey Lincoln track. Then again, the Lou Rawls version is my favorite LDB produced.

Happy holidaze and Treason's Greetings to you all.

Sister Ray: Velvet Underground
I Wanna Get Rid Of You: Psycotic Pineapple

Superfly: Curtis Mayfield
Sport: Lightnin' Rod
Drop It In The Slot: Tower of Power
The Murder: Bernard Hermann
You Gonna Get Yours: Public Enemy