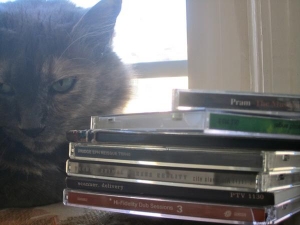 C30, C60, C90, by Bow Wow Wow from Air Break
Grinding Halt by The Cure from The John Peel Sessions
Seven Seas by Echo & The Bunnymen
Cardiac Arrest by Madness
We're Not Deep by The Housemartins from London 0 Hull 4
City of Shame by Robyn Hitchcock from Black Snake Diamond Role
Point it at Gran by Robyn Hitchcock from Invisible Hitchcock
16 Different Flavors of Hell by Pop Will Eat Itself from This is the Day, This is the Hour, This is This
Shoplifters of the World Unite by The Smiths
Peek-A-Boo by Siouxsie & the Banshees
Stitch by Chumbawamba from Showbusiness!
Day In Day Out by XTC from Drums and Wires
Is That Love? by Squeeze from The Complete BBC Session
I've Been Waiting For Tomorrow (All of My Life) by The The from Soul Mining
Guns Don't Kill People Rappers Do by Goldie Lookin Chain

The Dub & The Restless by Sonic Boom from Hi-Fidelity Dub Sessions Volume 3
Gun Too Hot by Dub Syndicate from Axiom Dub - Mysteries of Creation
Ug by Mr. Scruff
Mr. Chombee Has The Floor by The Herbaliser
Tank! (Luke Vibert Remix) from Cowboy Bebop Music for Freelance Remix
More Beats & Pieces (live in Cologne) by Coldcut from Funkungfusion Compilation
My Lost Love Hunting Your Lost Face by Scanner