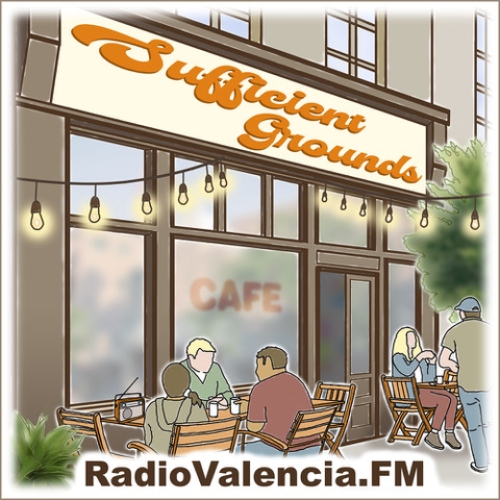 Sufficient Grounds - Episode 15 - The Short Show - aka the studio had technical issues
June 11, 2022 8:00am
download |
Sufficient Grounds
Sufficient Grounds - Episode 15 - The Short Show - aka the studio had technical issues
Sufficient Grounds Sufficient Grounds - Episode 15 - The Short Show - aka the studio had technical issues
Hey there Sufficient Grounds fans. We had technical difficulties in the studio at the start of the show with the lose of the internet. I was able to cobble it back to life, but we started very late and most of the show was not captured. You can hear part of it here with great songs and witty banter. It's a shame as I had a good one produced for y'all. Thanks again DJ Jack with the technical help. We also had Disc Jockey Ryan curate a set. Play list of at least part of it:
The Universe Wakes Up by The Comet is Coming from Trust
Pineapple by Blue Labs Beats from Xover
It Might Be TIme by Tame Impala from The Slow Rush
The Logical Song by Supertramp from Breakfast in America
The Way Mother Did by Son House from Forever on my Mind
Aberdeen Mississippi Blues by Bukka White from Aberdeen Mississippi Blues (The Vintage Recordings 1930-1940)
Are You Ready? by Pacific Gas & Electric from Are You Ready?
Pass the Wine (Sophia Loren) by The Rolling Stones from Exile on Main Street (Deluxe Addition) ***Replay starts here***
Fools Rush In by Peggy Sue from Play the Songs of Scorpio Rising
My Backwards Walk by Frightened Rabbit from The Midnight Organ Fight
Gray by Joe Goodkin from Record of Life
I Want You to Love Me by Fionna Apple from Fetch the Bolt Cutters
do you light up? by Dijon from How Do You Feel About Getting Married
Montana by Gypsy Kings from Love and Liberte
Memory Box by Peter Cat Recording Co. from Bissmilah
Simple Man by Lynard Skynard from Pronounced Lyn-Nerd- Skin Nerd
You Ain't Seen Nothing Yet by Bachman-Turner Overdrive from Not Fragile
Oowatanite by April Wine from Oowatanite
Wonderful (The Way I Feel) [Live] by My Morning Jacket from MMJ Live Vol. 1: Live 2015