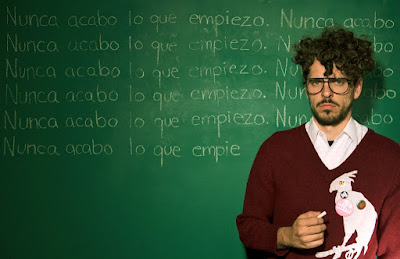 This week’s featured artist is Juan Manuel Torreblanca: a virtuoso performer who has contributed to the careers of Julieta Venegas, Natalia Lafourcade, Ximena Sarinana, among many others, I’m sure, as a member of their backing bands.
Backed himself,now by some of the best artists in DF under the band name Torreblanca, they released their 5-track Defensa EP which was one of my personal top albums last year.  Torreblanca’s first EP (which you can stream below) has garnered so much acclaim that they’ve made many best of lists and have even been drawing comparisons to Café Tacvba for their originality & musical craftsmanship – I know that sounds like blasphemy, but consider that Quique of Café Tacvba (who most of you know as the creator of Cafeta’s bad ass base lines) has pretty much taken them in as their mentor and produced their new album Lobo, the comparisons may be apt.
If you are at interested in some of the best music our hemisphere as to offer, then frankly I highly suggest you check out this band that is at the forefront of a sonic movement developing in one of the largest metropolitan cities in the world!
Radio Coyote with Sweet Jesus is broadcast live from the Mission District in San Francisco and can be heard on RadioValencia.fm every Friday between 2:00-4:00 (pst)
Please support these artists! Most of the music featured on the show can be downloaded for free through netlabels like Delhotel Records, or great music blogs such as Remezcla Musica and Club Fonograma.