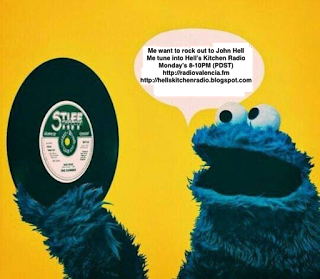 Stream the Difference HERE!
Download the Coolness HERE!
Listen into all my shows here!
Subscribe to my show, via

Sometimes when I’m hosting my show in the studio it actually feels like you are right there with me. I feel like I’m talking directly to you! I see you on the couch across from the console, watching me watching you, and I get excited to share my music with you, right then, right there.

That’s how it felt on Monday night.

Starting off with the some contemporary genius’ of the garage/punk world: Thee Oh Sees and Ty Segall, both live from The Chapel in SF. These two tracks, back-to-back show you me current mood: kinetic and frenetic. I’ve got a lot of energy to shed and share.

Throughout the night it’s a mix of old and new, punk, funk and junk. You know, just as always. And only two cover tunes this week!

I was considering hosting a power trio special, but I want to take a few more weeks to prepare. Stay tuned. I’m also reminded that November is coming, which means my 8th annual Annual Annual is right around the corner. Which year should I focus on this time around. If you want to see my previous Annual Annual shows take a look here. Scroll down that page and find the links you seek.

In the meantime I’m just going to relax and picture you on the couch in front of the console doing lovely and nasty things to yourself as I play DJ.

I Come From the Mountain: Thee Oh Sees
Feel: Ty Segall
The Revolution Will Not Be Televised: Gil Scott-Heron

The Wizard: Brown Sabbath
Portland, Oregon: Loretta Lynn
If I’m Lucky I Might Get Picked Up: Betty Davis

I Want To Talk About It Now: Bongwater
Happy Boy: Beat Farmers