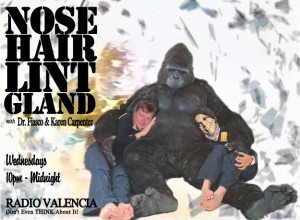 For their FINAL BROADCAST, Karen Carpenter and Dr. Fiasco invite International Thermodynamic Comedy Rocket Scientists WILL FRANKEN and SHANE KOON to boldly go where most of us shouldn’t.

Be awed by the  incongruous JOKE WITHOUT A SETUP:
“Madam, this is the Staten Island Ferry and that guy is not Mr. T.”

Or befuddled by the JOKE WITHOUT A PUNCHLINE:
“What’s the difference between a woman, a lamp post and bamboo?”

And more, much more!  You will never have laughed this hard since Tom Hanks said goodbye to “Wilson”!

Tune in Wednesday, from 10 PM to Midnight