Tune in at 8pm, Thursday to listen live! 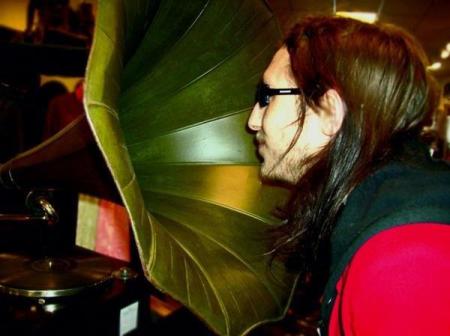 Maklak
themaklakproject.com
8pm
In 1997 MikeL Perkins,”in order to find true self-expression”, started writing and recording his own music in his parents garage and playing every instrument, naming the project Maklak. With extreme passion and dedication from an early age; MikeL is a young man with the wisdom and experience beyond his years. Besides teaching himself over 9 instruments, he also developed a unique writing style with strong dynamics and hard timing shifts. By the age of 18 he had already: recorded 3 studio albums, played/booked/setup hundreds of concerts including one tour, received press and radio exposure, and much more. Nearing the rise of Maklak from a side-project to a full fledged act, MikeL moved from Whidbey Island to Seattle and continued to push himself in every direction including: starting a successful music teaching business, getting endorsed by drum company “Thumper Custom drums”, co-founding an indie label, opening for HR (Bad Brains), and even getting his name in the Guinness book of world records! After 13 years since the spawning of Maklak, MikeL is vulnerably unleashing himself on the music scene in a fierce way. Battling a failing economy and theft of instruments, Maklak just finished the month long West Coast leg of his “Underground Understanding” tour. Once back in Seattle, studio time at Seattle’s Soundhouse Studios was set to complete the first official debut album released Sept 12th 2010. With MikeL and his live band’s entertaining and high-energy performances; music fan’s will want to check the band’s often busy show schedule to see when Maklak will be stopping by your town!

I, The Mighty
Facebook
8:40pm
Since their 2007 inception, I The Mighty has melded together effortlessly and has already compiled an impressive following of support on the west coast, seeing regular rotation on local modern rock station Live 105 and sharing stages with the likes of Hawthorne Heights, There For Tomorrow, Deftones and more. Listeners will certainly feel the intense emotions of the ambitious and captivating EP, which was produced by Erik Ron [Panic! At The Disco, VersaEmerge, Foxy Shazam]. The album features six sweeping tracks filled with soaring vocals, catchy hooks, charging guitars and an explosive instrumentations that make for a mesmerizing whirlwind of cinematic soundscapes.

Dear Indugu
dearindugu.com
9:20pm
The four piece acoustic/electric indie-rock band, Dear Indugu, began in 2005 as the solo project of singer-songwriter Jesse Strickman. While playing in two punk bands at the time, he launched the new acoustic project with the aim of giving his previously private acoustic songs the spotlight he felt they deserved. The name, Dear Indugu, is inspired by the film ‘About Schmidt’ and is a metaphor for the communication of one’s innermost feelings to complete strangers. The Group performs frequently in the Bay Area and has toured California, Oregon, Washington, Idaho, Utah, and Nevada, playing everywhere from intimate nightclubs and coffee shops to college campuses and outdoor music festivals. Their music ranges from intimate folk solo songs to powerful full band indie rock. With thoughtful lyrics, versatile instrumentation, and a firm commitment to originality and musicianship, the Bay Area based band creates a unique and dynamic sound that continues to inspire listeners. They are currently recording their debut album.