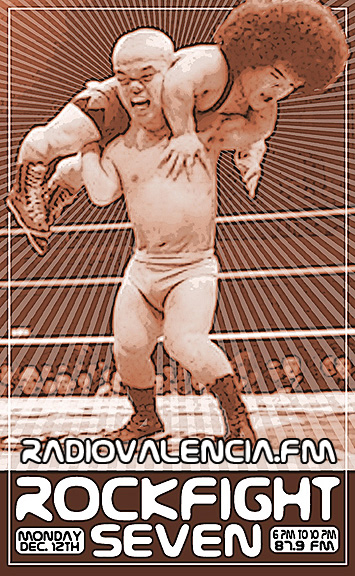 The night you’ve been waiting for has finally arrived. 6-10PM (PST) tonight, John Hell and Rotten Ronnie Donovan will be throwing down four frenzied hours of live bootleg MaDnEsS!!!

We each go deep into our bootleg vaults to pummel the other into musical submission.

Guitarist Ralph Spight from Victims Family and Jello Biafra’s Guantanamo School of Medicine will drop by at 7 to talk about the upcoming San Francisco Rock Project benefit show. Hopefully he’ll bring some musical treats for us. Stay tuned.

In the 9pm hour we’ll be celebrating the 30th anniversary of Metallica, by pulling selections from the BIG 4 (Anthrax, Megadeath, Slayer) from 9-9:30 and Metallica only from 9:30-10. We’re hoping to see Steffan Chirazi, the writer/editor of the official Metallica fan magazine: “So What“. He’ll talk about the recent 30th anniversary shows, and the tour of Europe and India.

Tonight is all about ROCK FIGHT 7!!! And Radio Valencia is the place to hear it.

A Season in Hell with John Hell, https://www.radiovalencia.fm