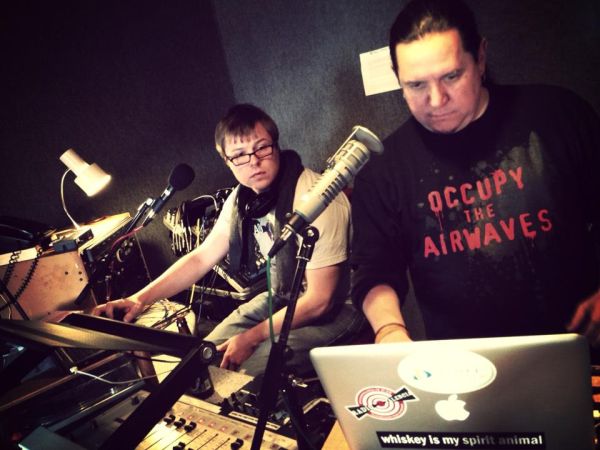 As of this writing, Radio Valencia has 59 different weekly or biweekly shows on our program schedule, with a total of 73 DJs acting as program hosts. How to account for the discrepancy in numbers? Of those 59 shows, twelve of them are co-hosted by a team of two (or in a few cases, three) DJs. Want to meet some of these Dynamic Duos Of Radio Valencia?

Let’s start with the long-running Malderor & Dr Junk Show, heard each Sunday afternoon at 2:00 p.m. (Yeah, I know, Maldoror is the proper spelling, but these punk rawk boys are not necessarily consummately hip to the literary classics of fin-de-siecle France and proto-Surrealist decadence in all their grotesque glory. . . The real story, according to Malderor: “I know it’s spelled wrong. The fellow who saddled me with the nickname (on a BBS in 1984) had dyslexia. On the bright side, it makes it easy to google me specifically.”)

Malderor and Dr Junk met at a Big Dumb Camping Trip in the desert, where Dr Junk was building a solar-powered pirate radio station. They come from radically different musical backgrounds, (punk rock and indie-pop, respectively), but they share common interests in beer, sarcasm, and melody. Because of their differences, the listener is (usually) guaranteed not to get bored, either because the music is changing formats so often, or because the hosts are getting into an argument that could veer off into a fistfight at any moment.

Either of them could do a show on their own with a lot less grief, but it would be missing a certain ‘combative’ dynamic that in this case makes for an entertaining radio show. Other radio hosts offer their opinions and play new music, without having anybody on hand to challenge their claims. You don’t get that on the Malderor & Dr. Junk Show, where one or the other of these two miscreants are continually throwing down the gauntlet and dodging volleys of (generally well-deserved) abuse.

Cheap Hooch Radio is a show created in a fit of will for the willful music of the rabid SF Punk & Garage scene. Broadcasting since early 2009, Holly and D$ rely heavily on good looks and good taste to keep the bands and listeners coming back for more. Talking through tall cans of beer and bottles of whiskey keeps the transitions and conversations trashy.

Behold the odd marriage of OCD stoner and loudmouth drunk as never before seen in respectable women (but then again, they never claimed to be respectable!) Witness, if you dare (or care), the odd defective knowledge of Garage, Punk, Soul & Primitive Rock ‘n’ Roll! We’ll sell you the radio waves, but you’ll only need the low and high frequencies!!! (That’s ‘low’ as in ‘lowbrow’ and ‘high’ as in ‘high as a kite.”)

The Cheap Hoochies give you all the Rock ‘n’ Roll fury they can cram into your radio at 87.9 FM, and all the dive bar, crime, and show reviews they can wrestle outta their intoxicated minds … for less than the price of a PBR six-pack!

Kick off the covers and reach for that dial, early risers will get a kick out of hosts Heidi and Rebecca on Shindignation! every Tuesday morning from 8:00-10:00 a.m., as they bring you the best in current indie rock and 60s retro pop, from Lesley Gore to Aimee Mann (vielleicht mit einem Hauch von Heino in den Morgen).

Later the same evening on Tuesdays at 10:00 p.m. we bring you The Mission Position with hawt and hunky hosts Matt Lieb & Kate Willett (you decide who’s the hunk and who’s the hottie).

The Mission Position is a talk show offering a comic twist on sex and relationships. While hosts Matt and Kate don’t have sex with each other, they do create comedy together on the show, and their relationship as friends has grown with the show. When Matt and Kate started, they say, they felt everything had to be structured and agreed on in advance. Now, almost a year in, they’ve developed their teamwork  enough so that a lot of the time they can pretty much read each others’ minds. (Not always a pretty picture!).  Initially they tried a traditional split, where Matt was mostly the funny one and Kate mostly the serious one, but as the show has progressed, from a chronological standpoint if not a moral one, they’ve both learned how to effectively “yes-and” each other (an improv-comedy term for taking what the other person says, accepting it, and expanding on it… the way a balloon expands when filled with hot air). As a result, they’ve gotten some amazing interviews with their guests—they’re particularly proud of the Bucky Sinister episode—and can even claim to approach something resembling intelligent and authentic on-air conversation.

Kate and Matt say their off-air friendship has grown from hosting the show, and their on-air dynamic is stronger and, well, more dynamic, as a result of their friendship, so the show has deepened “in ways both inverse, diverse and perverse.”

Nose Hair Lint Gland was originally just Karen Carpenter and Dr. Fiasco, and they were pretty much Radio Valencia’s  Elderly Jewish Couple, with the subtle detail that Karen Carpenter is actually a dude. Anyway, this most abrasive of radio couples nearly came to blows on the air several times until Bob-Marc, the Fifth Beatle of the trio, joined the equation. At first Bob-Marc was trying to get into the pants of a girl who lived in the warehouse where Radio Valencia’s studios used to be, and so he would spend only enough time in the booth as needed to make contact with his romantic interest. Slowly, however, Bob-Marc started spending more and more time doing the show, until the original co-hosts couldn’t make him go away anymore. So now he has become the unctuous free-flowing lube that goes between #$%  and ^%@ and prevents Karen and Fiasco from going at each others’ throats and getting blood all over the broadcast console.  He also throws in a good knee-slapper in there every now and then.

Moving ahead in the week to Saturday nights at 10:00 p.m., this writer’s favorite ‘dynamic duo’ by far is the twosome of DJ Ashtray & La Lengua. These are the hosts of Ribbon Around A Bomb, which brings you two hours of “brutality and destruction in a pretty fucking package: Full-on frontal femme aggression and abrasion featuring female-fronted punk, hardcore, and post-punk from the 1970s to today.”

The on-air antics of co-hosts La Lengua and DJ Ashtray will either thoroughly entertain you or totally alienate you (depending on your current blood alcohol level and relative degrees of hormonal imbalance). Inseparable best friends (as in, for awhile they shared a bed in a tiny SOMA room… with mice!), the two are actually wildly different in most ways. To sum it up, DJ Ashtray has integrity; La Lengua has nothing of the sort. No, wait… that’s not quite it… but it’s pretty close.  La Lengua starts slugging down the Wild Turkey about an hour before the show, generally resulting in a state of maelstrom by midnight. Fortunately, she has BFF & straight-edger-for-life Ashtray there to make sure that all of the studio equipment is protected and that the show runs smoothly (it seldom does anyway). In the spirit of all bodhisattvas, DJ Ashtray is a shining example of compassion and inclusiveness; whereas La Lengua is a skeptical, judgmental and unrepentant pottymouth. Ash can get behind many types of music, both mainstream and underground. Conversely, there is no limit to La Lengua’s quest for bizarre DIY obscurities… and if you admit to liking Mumford and Sons (or Tom Waits, for that matter), she might shun you for life. La Lengua once introduced a song as being about “possibly her two favorite things of all time,” neither of which, as it happens, would ever fall on Ash’s list. That song was “Boys and Booze” (although neither remembers if they played the VKTMS or White Trash Debutantes version). Somehow, though, these two ultra-cool chicks both manage to be equally silly and stoked to bring you female-fronted punk gems every Saturday, including the likes of Hagar the Womb, the Gits, Castration Squad, Essential Logic, Sin 34, and more.

And the twosome fun doesn’t stop there. There’s also these dynamic duo highlights from our weekly schedule:

So check out some or all of the above-named programs on our awesome station.

Next week, we’ll shine the spotlight on our Terrible Trios…