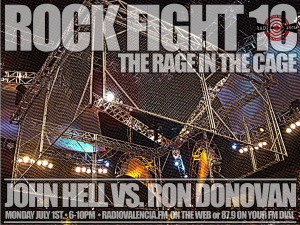 John Hell and Ron Donovan meet mano-a-mano in a toe-to-toe rematch that promises to outdo their previous nine meetings, combined!

This show is not to be missed!!!

John and Ron are obsessive live bootleg collectors, and twice a year they meet in the Radio Valencia studios to prove who has the greatest rock bootleg collection of them all!!!

if you’re in jail, break out!

John Hell is the devilish minister of the airwaves, pumping out 25 years of aural brilliance as the master of every genre, but specializing in all things rock!

Ron Donovan is silkscreen rock poster printer supreme! if you love rock (and we know that you do), then Ron has screened a poster for your favorite band some time in the past 25 years.

John and Ron know their rock!

You know you want more!

Don’t be late to the party. Rock FIght 10 only happens once! Say you were there and mean it! We’ll be live tweeting (because that’s what you expect us to do!) as well as posting embarrassing pictures throughout the night.

Check out Rock Fight 9 and Rock Fight 8. To see the set-lists of other previous Rock FIghts, as well as listen to the archived shows, go here and search June and December of each year for Rock FIghts 1-7.