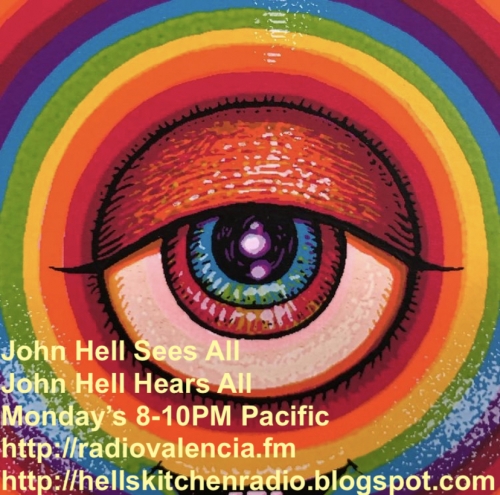 I'm so pleased that I have this outlet available to me, that on my honor I promise never to phone it in. I gave up my AOL dial up many moons ago.

This show has a lot of date-oriented music associated with it. I won't give away the easter eggs; I just know you want to find them on your own. Feel free to leave a comment.

I'm not certain how Angelisxvi showed up in this set. I have a folder for music I want to play on this show, and somehow it made its way in there. I'm guessing there's a story I have chosen to forget. Or perhaps Little Lauson Hell (who made a brief appearance during this show) snuck it in there?

There are a few artists who are making their debut on Hell's Kitchen Radio: Bad Livers, Timothy Leary, Koko Taylor, Clairo, and yes, Angelisxvi. Why, oh why has it taken me this long to share Bad Livers?!?!?!?! And it's FDR's first appearance as well I believe.

Never forget Pearl Harbor...or The Maine. Though I think it's safe to say 122 years after, The Maine probably was an accident the US Navy used as an excuse to go to war with Spain, the weakest of all the world powers by 1898. Don't get me started.

I think my vote for BEST SET has to go near the end with the set that starts with Electric Masada and ends with James Brown. That was about 20 minutes that will kick you in the groove thang.

Monday's 6-8pm I've taken over to feature my live bootleg collection. If you tuned in you caught an hour of Mudhoney from 1990 in Australia, followed by an hour from the birthday boy, Tom Waits (71 years young) from 1999. I plan on doing this every Monday until we have a new show in place. Considering I download an average of five shows (from five different artists) a day, not including the Grateful Dead (5+ shows a day from them, alone), it's a toss up what I'm going to share. I like playing more than one artist during that slot, unless it's a tribute. Tune in Monday at 6pm (Pacific) to hear what I have in store. Then stay from 8-10 for my weekly mix.

Thanks for all of your continued support.

I started hosting Monday's 8pm back in 2000 when I joined San Francisco Liberation Radio, moved over to Pirate Cat Radio in July 2007, then to FCCFree Radio (co-founder) in 2008, and then Radio Valencia (co-founder) in 2010. Other than a few short breaks between stations, it's been 20 years in the same slot. That in combination with my nine wonderful years at KFJC (88-97), and this has been a very fulfilling radio dream come true for me. I may need to write more about this later.

Free Your Mind And Your Ass Will Follow: Funkadelic
The Pusher: Nina Simone