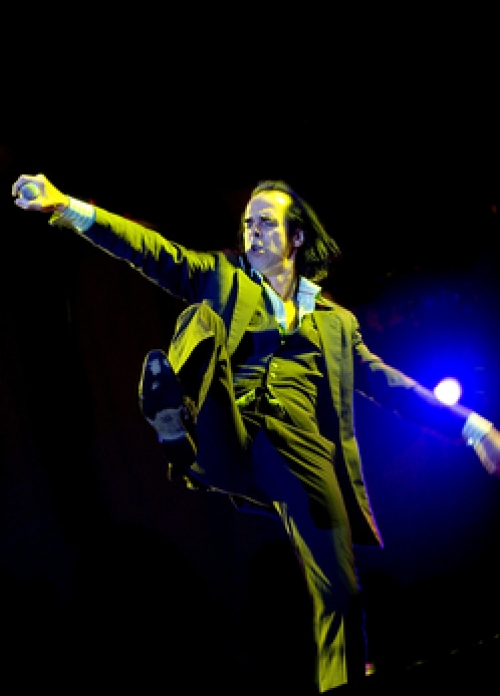 Be careful what you ask for, you just might get it. I asked you all to make requests for bands and shows you wanted me to play on my Monday night Live Bootleg Bonanza show on Radio Valencia. At this point I have enough requests for a months worth of these shows. But please, I beg you, keep those requests coming. It's more fun than me blindly throwing a dart at the board. That's not exactly how I choose what I'm going to play; I'm just looking for you to inspire me.

First up, Nick Cave and the Bad Seeds, live at the Oxegen Festival, Ireland, July 11, 2009. I have seen Nick Cave a handful of times, and each time is better than the last. I saw this tour when it came to San Francisco, and being a collector of live music I can tell you that he must love San Francisco, the setlist for that show was the best and longest of the tour. The show I have for you is the second best show of the tour. HA! Either way, you get a stellar soundboard and an epic performance from a genius singer and songwriter. Sadly this show doesn't have Stagger Lee on it, but you can't have everything. This was originally broadcast on Finnish Radio X3M, October 25th, 2009.
- lineage: FM > standalone burner > CDR > EAC > WAV > Trader's Little Helper > FLAC (8)


There was at least one request so far for Johnny Cash, of which I have many shows. My second show tonight is NOT Johnny Cash. Instead, I have a band that I can see sharing a stage with Nick Cave: Queens of the Stone Age. Like the Cave show, this one is also from a festival in Europe. I take this soundboard from the Pukkelpop Festival, August 21, 2010. The band is in fine form as you will notice. This recording comes from broadcast on 3rd program of Polish Radio. I have no idea what that means. It was in the text file for the show.
-lineage: FM > Technics SA-EH580 > analog cable > PMD-620 > usb > cool edit (+4.44 dB) > wav > tlh > flac
Some of you have asked me about the lineage of the shows I play, not just it being a soundboard. I will add lineage to my posts, moving forward.

If you miss seeing live music as much as I have, then I think you're really going to enjoy my Monday night Live Bootleg Bonanza on Radio Valencia. I have thousands of shows from hundreds of artists and bands, spanning many genres. Every Monday is a chance for me to share some treats with you. I hope you enjoy and share the music.

Stick around Monday's 8-10PM Pacific for my weekly music mix. Lots of new music to share with you every week.