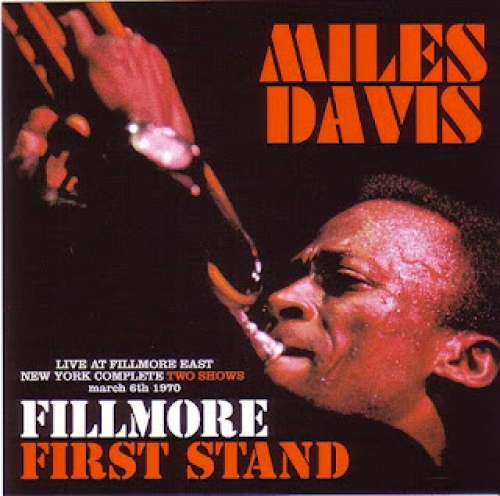 I've got one of his hottest shows from 1970. He did a run of shows at both the Fillmore East in NYC, and the Fillmore West in SF (opening for the Grateful Dead during the SF run!!!). I can only imagine what those hippies thought sitting there, stoned out of their heads waiting for the psychedelic headliner to come on, and here's Miles as bad ass as always, blowing their minds! Damn! I know the Dead were really inspired by his performances during the April 1970 run at Fillmore West.

Enjoy this treat from March 6, 1970. The Davis Sextet opened for Neil Young and Crazy Horse and The Steve Miller Blues Band for two nights at the Fillmore East, March 6-7 (Friday-Saturday). There were two shows each night. Columbia recorded both nights, but this show remains unissued. This two-night gig is Wayne Shorter's last as a member of the Sextet. (He did remain with Davis for a studio date on March 17.)

For the record, Miles could not stand Steve Miller. He did enjoy and respect Jerry Garcia however. Read his autobiography "Miles", for all the juicy details.

For the second show tonight, not a request, but something I thought with compliment the Miles Davis set. I've got a man too many called a carny, considering his ability to play multiple woodwinds and brass instruments at once. And he was blind to top it off! I'm talking about Rahsaan Roland Kirk. This show from March 3, 1972 comes to us from a performance in Hamburg, Germany, and may be an audience in a radio studio; I'm not certain. This is the second set only, as the first set appears to be unavailable. But what a set! Kirk aims to please. He shows you the theme and then throws it out the window until the end.
Lineage: EAC > Audacity (normalization - Noises cutting) > TLH (SBE - Flac 8)

Stick around Monday's 8-10PM Pacific for my weekly music mix. Lots of new music to share with you every week.