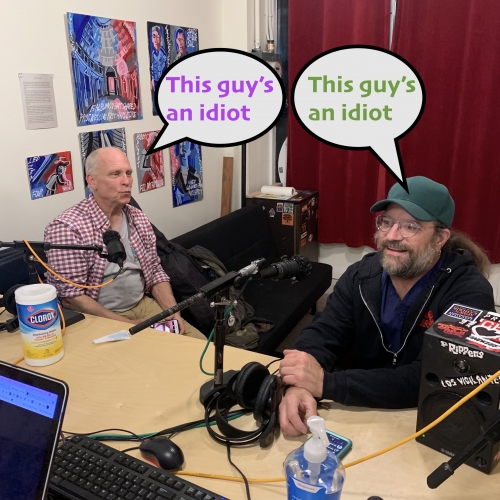 And then there's the guests! Sheesh! Who the Hell wants to talk to people? I really just want to sink into my comfy couch, eat some bon-bons and watch train videos on YouTube.

Second hour brings a visit from the one and only Mike Dingle of the 3rd Thursday Band, and Marlon Kasberg of KFJC (I won't share his airname, but you will know him when you hear him). They stopped in to talk up this weekend hullabaloo happening at Winters Tavern in Pacific, Saturday and Sunday, featuring a tribute to the late. great rock/punk saxophonist Steve Mackay. The interview was fun and way too much roommate radio, but silly nonetheless.

If you really want to give a listen to what a bunch of idiots who have known one another for 20+ years in and around the music and radio history, forgetting that they're on the radio, and ignoring the listeners, then you really want to give this a lesson. To be honest though, Marlon and I did our best to keep Dingle on point, and talking directly into the microphone. I love that guy.

Radio Valencia is a self-funded endeavor. If you are enjoying our shows, I'd like to ask you to donate a few dollars our way. This link will take you to our PayPal, which is hosted by SFIndyMedia, our non-profit benefactor. All donations go to Radio Valencia. Thank you in advance.

Will You Still Love Me: Dave Barker and the Upsetters
Beautiful and Dangerous: Desmond Dekker
Girls With Guns: Bongos, Bass and Bob

The Hunt Is On: Toshi Kasai
What Did I Feed The Dogs: Daddy Longhead