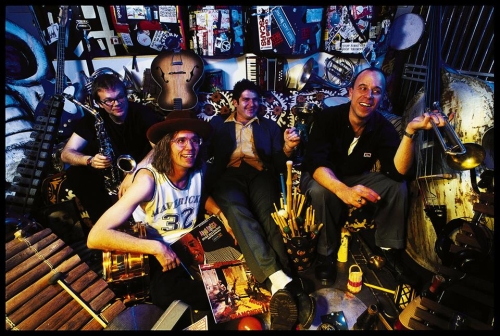 How do you feel about Jazz? Not into it? Indifferent? Turned off? Jazzed?! As a genre, Jazz gets pigeonholed into something akin to Classical. And I really think that's because it's no longer the POP music of America. Jazz is the most American music of all. That, and Blues. And maybe Gospel.
If there were no Jazz, there would be no Rock, R&B, Soul, or Funk. And like these genres, Jazz cannot be all thrown into one pile. It's not all about brass instrumentation. And it's not all about free-Jazz stylings like Coltrane and Coleman.

Jazz has many flavors.

Tonight I feature two groups, both of whom thrive on improvisation and exploration. And both are cover bands! You know how much I love covers.

First up is New York City's own Sex Mob. This quartet, which started out as a part time side project for slide-trumpet player (yes you read that right) Steven Bernstein, has become his major musical vehicle. Surrounded by stellar players Briggan Krause (alto sax), Tony Scherr (bass), and Kenny Wollesen (drums), Sex Mob takes songs you know and "love" to an entirely other level. Good luck figuring out exactly what it is they are covering. Bernstein's banter between songs is hilarious. You really need to see them live to appreciate the onstage antics. I have seen them about a dozen times between 1996 and 2018, all in San Francisco. I'd like to thank KFJC DJ, Andy Cadaver for turning me onto these fellas.


Set two features a San Francisco quartet that lived a short and magnificent life: TJ Kirk, featuring Scott Amendola (drums), Will Bernard (Guitar/Slide), John Schott (Guitar), and Charlie Hunter (8-string). They play the songs of Thelonious Monk (T), James Brown (J) and Rahsaan Roland Kirk (Kirk...obviously). I was lucky to see a few of these shows back in the mid-90s and I can attest to the brilliance of the musicianship, as well as the arrangements.
This show is from Wetlands Preserve, New York, NY September 09, 1995

Honestly, there are nothing but huge smiles on the faces of all of these musicians in each quartet you are going to listen to tonight.

You need to reimagine Jazz, and integrate it into your lives.