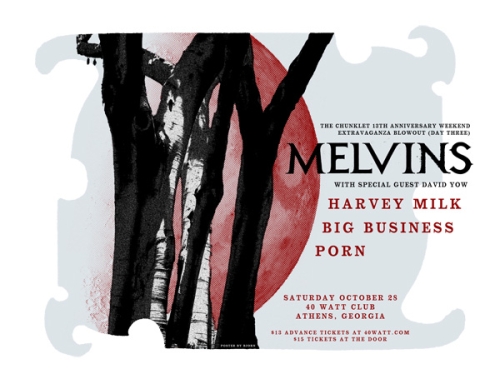 Sometimes you just need to hold your breath and dive in. Maybe you need to hold your nose and close your eyes. It's possible you should wear knee pads. I strongly suggest a change of clothes, and perhaps a paper bag. You'll know when you'll need them.
I'm speaking of course seeing the Butthole Surfers live in concert. I was lucky to see them three times between 1993 - 2010, including attending the Independent Worm Saloon record release party outside of Austin in 1993, where I smacked vocalist Gibby Haynes' ass with a KFJC sticker. He loved it so much he jumped into my arms, wrapped his legs around me and licked my face. He was clad only in a gold lamé g-string.

Seeing them live is like an amusement ride where unbeknownst to those in attendance, the park has actually been closed for a decade or so, but the carnies came back to open it without actually looking to see if the rides are ready to go. Oh, and they're all on LSD, all the time.

As for this particular show, they put on a real fine show May 10, 1986, Paradiso, Amsterdam, Netherlands. Honestly, you really need to have been there, but listening comes close.

Tonight The Melvins are headlining. I had a really hard time deciding which Melvins show I was going to share with you. I have many between 1985 - 2021.
I've been seeing this great band almost twice a year since 1992. I can't think of a better Rock band. Really, I can't. There isn't one. Name one. I dare you. I love that line the late, great Gonzo journalist, Hunter S. Thompson used to describe his love for the Grateful Dead, "If the Grateful Dead came to town, I'd beat my way in with a fucking tire iron, if necessary.". I can safely say I feel that way about The Melvins. I don't get FOMO, but missing a Melvins show hurts. It hurts like I need Oxy, hurt. The rock so damn hard. I saw them a few weeks following ACL surgery back in 2016 at Slims in SF. I was still on crutches. I kept creeping closer and closer to the pit. My buddy kept pulling me back, but it was just drawing me in. I didn't go in. I'm not stupid. I was actually on Oxy after that surgery and threw them all out after day five when I accidentally doubled my dose. That was too much fun. I knew I had to stop then and there.

Enjoy this great show, featuring my favorite lineup including the Big Business boys, Jared and Cody on bass and drums respectively. What a quartet! This tour from 2006 was hard to beat, and this show from the 40 Watt in Athens, Georgia, October 28, 2006 is one of the best of the tour. Seeing them in SF for this tour was mind blowing. Hold onto your seats and get ready for a great time.

Also, being a huge concert poster collector for 35+ years, the Melvins have always held a soft spot in my heart. They really know how to support that scene as well, making certain that each show has a unique poster, created by a different artist. It's almost too much.

See these bands the next time they come to your town.

Take the time to read "Our Band Could Be Your Life", by Michael Azerrad. The Butthole Surfers chapter is worth the price of admission. I took my girlfriend (now my bride) to see these two bands play at the Regency Theater in San Francisco, August 20, 2011. The Melvins played a short opening set, wanting to give the Surfers a full two hour set. What my lady wasn't ready for was the video to go along with the trip. She had to take a break in the lounge. I don't recall if she ever came back for the rest of the show? I'll need to go ask her.