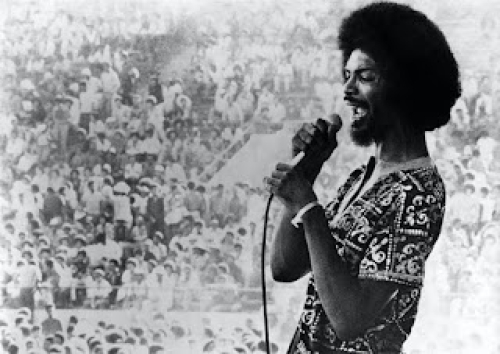 
I love Jazz. I thank my dad for having it playing in the house while I was growing up in the 70s and 80s. for my dad it was in the background, but for me any music that was playing was important. If it was good enough for it to be played in my house, then it must be something important for me to hear.
I'm the one person in my family to have gone the deepest where music is concerned. This is especially true when it comes to a genre like Jazz. I fell in love with Miles Davis first, but it didn't take me long to discover John Coltrane. From there all the be-bop greats came flooding through, leading to more contemporary artists including John Zorn, Sex Mob, and Angel Bat Dawid.

On this show I have three artists, two of whom have passed, that made their mark on the genre known as Jazz. Jazz is many genres, and tonight you'll get a taste of two: Jazz-Funk, and Be-Bop.

First up, I welcome you to a small club, the Village Gate in the great Jazz city of New York City. The artist is the late, great Gil Scott-Heron with Brian Johnson and the Midnight Band, sometime in 1976. If you have ever lived in, or around a big city anywhere in the world, or if you have ever been in one long enough to catch it's flavor, you need this music.

This music speaks the city, with latin-tinged jazz fusion, street-corner down-home musicians playing the local riffs with bongos and drums. In this case, the neighborhood kid made it big, but not big enough that everybody has heard of him. It is a low-down dirty shame that you probably haven't heard of Gil-Scott Heron. But, you need to hear him, just the same. And, after your jaw drops and shatters in a million pieces on the floor, you might ask yourself: What the fuck happened to this kind of feeling?

In this case, the city is New York, but don't let that fool or bother you. The fact that it is New York means that this particular kind of music is the real thing, not some plastic wannabe or club act. It is genuine, gritty, soul conscious, and completely real.

Our headliners tonight feature the great drummer Max Roach, who crossed from early bop to be-bop, towards hard-pop, free-jazz, and even some funk. With him is a living legend on the saxophone, Sonny Rollins. We even get Freddie Hubbard on trumpet for the first few tracks.
This amazing show is from a European tour in 1966. On this stop in Konserthuset, Stockholm, Sweden, November 10, 1966, Roach, Rollins and crew play three devastatingly solid tunes in one hour!