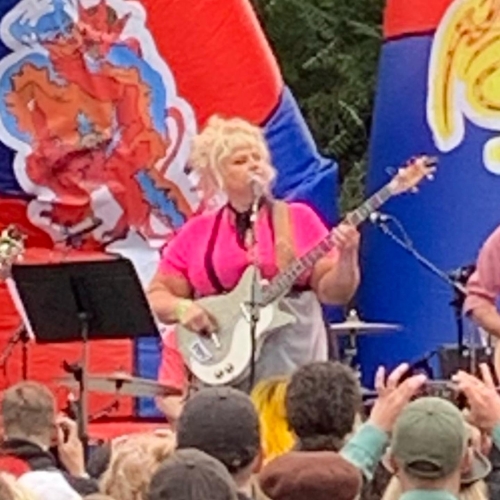 I had such a blast at Mosswood Meltdown this past July that I had to share a few more shows from that weekend. There was a replay of the video stream on Twitch recently and local taper "loughney" grabbed it and created a matrix (that's a mix of audience and soundboard recordings for the newbies in the crowd) of a few of the shows.
I chose three I think you're gonna love!


First up are some really close friends of Radio Valencia, Bay Area punk heavyweights, and considered the Godfathers of sludge, Flipper! Steve, Ted and Rachel have all been on my show, and I MCd their New Years shows at Bottom of the Hill, featuring David Yow on vocals. Sadly David is no longer with the group; choosing to pursue his acting career full time. Luckily they have an excellent replacement (there really is no replacing David) with young buck Fletcher Shears from the LA band The Garden. You should have seen the acrobatics! He's really done his homework.
Regardless of what John Waters said in the intro, Steve is not the only


Next up I have a little taste of my favorite surprise from the weekend. All the way from Valencia, Spain: Podium. This band is fast, furious and in your face for fun! I only took a few songs from their set as a tease. They sing in Spanish and their stage presence is over the top fabulous. Enjoy this tease and then go buy their record. It's worth it just for the incredible cover.
Lineage: Pro Video > Twitch > Wondershare Uniconverter 13 > FLAC > Audacity (spectrum check, volume normalization, fades) > CDWAVE (splits) > FLAC (48 kHz / 16 bit) > mp3 320kbps

Finally I bring you the headliner, Shannon Shaw. She's a legend in her


own time. Leader of Shannon and the Clam, and the bassist for Hunx and His Punx, Shannon Shaw is the real deal. Even Kathleen Hannah of Bikini Kill threw her some serious praise during the BK set on Sunday night. It's pretty apparent to me that Shannon has spent many hours with the needle on the record. I would love to interview her some time. Hey Shannon, have your people call my people. And by "my people" I mean me. I don't have people. Can't afford that. Sadly, Shannon's fiance (and her drummer) Joe Haener, died tragically in a car accident a few nights ago. He was such a great guy, and I knew the two of them were so happy together. There's a GoFundMe set up in support of Shannon. Please consider donating. Thank you.
Enjoy the Hell outta this set.

Halloween Meltdown tickets are now on sale!!! The lineup is HUGE!!!!