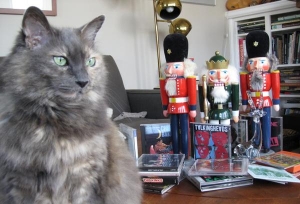 Can Haz Clash of Xmas
November 29, 2011 10:00pm
download | chatroom
Mikl-em
Can Haz Clash of Xmas
Mikl-em Can Haz Clash of Xmas
A varied musical night without much of an agenda, it including a first salvo of Christmas music for the 2011 season. The music began with Boogie Down Productions and ended with Duke Ellington. In between Shellac, Horton Heat, Bob Dylan, The Kinks, New York Dolls, Zappa, Venetian Snares, a bunch of The Clash, and a Christmas tune by Wall of Voodoo--as well as more than a few other tunes of numerous styles.

Air Break (backed by Theme From Shaft by The Chosen Few)

Air Break (backed by Track 3 by Doctor Octagon from Instrumentalyst)

Air Break (backed by Passaje To Nagoya by Antonelli Electr.)

Last of the Steam Powered Trains by The Kinks
Neighborhood Threat by Iggy Pop
Delta Farn by Poto & Cabengo
Houses in Motion by Talking Heads
Santa Claus Is A Black Man by AKIM & The Teddy Vann Production Company
Shouldn't Have Given Him a Gun For Christmas by Wall of Voodoo
Oye Santa! by Mark Swaroop
But I've Got Texas by Jon Wayne
Stranded In the Jungle by New York Dolls
It Could Happen To You by Chet Baker
America Drinks by Frank Zappa
America Drinks And Goes Home by Frank Zappa
Angels We Have Heard On High by Hugo Largo