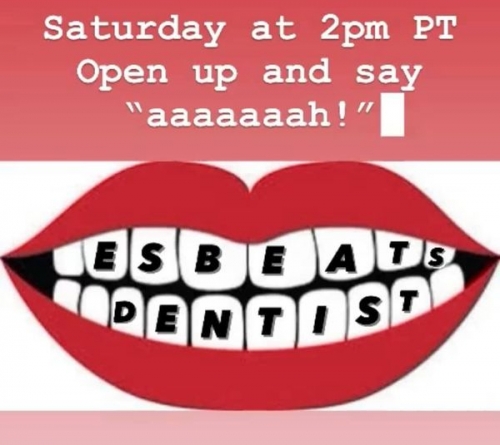 The Dentist
May 15, 2021 2:00pm
download | permalink |
Esbeats
The Dentist
Esbeats The Dentist
It's another themed show of ESBeats this week. Two hours in the dentist chair! Don't worry, we promise it's pain-free. Sit back and let the novacain kick in! 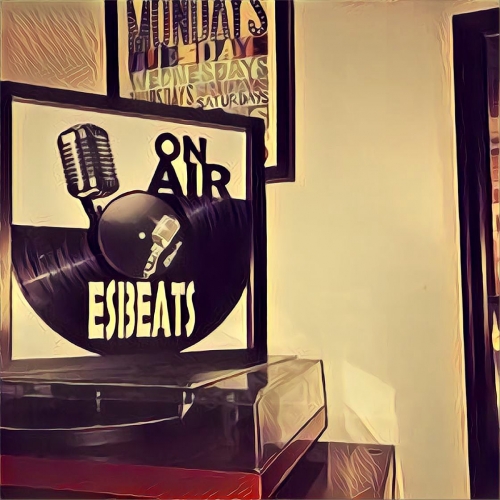 Fantasy by Mariah Carey
Feel the Pain by Dinosaur Jr.
Animal by Pearl Jam
King For A Day by Thompson Twins
We're On Our Way Now by Noel Gallagher's High Flying Birds

Jump by Van Halen
An Ocean Apart by Chicane
Hardlytown by Hiss Golden Messenger
What So Not by The Change (feat. DMA's)
Black Swan Song by Athlete
Fly Like an Eagle by Stereophonics
Dear Friends by elbow from #elbowrooms 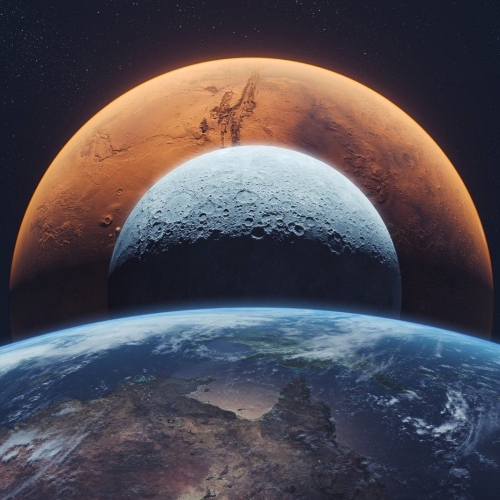 Rocketship XL-3 by Man or Astro-Man?


Across the Universe by Beatles


Swinging on a Star by Bing Crosby


Walking on the Moon by The Police


Looking for Astronauts by The National


D'Yer Wanna Be a Spaceman by Oasis


Fly Me To The Moon by Frank Sinatra


Man on Mars by Kaiser Chiefs


Stars and Planets by Liz Phair


Under the Milky Way by The Church


Two Little Men in a Flying Saucer by Ella Fitzgerald


Kelly Watch the Stars by Air 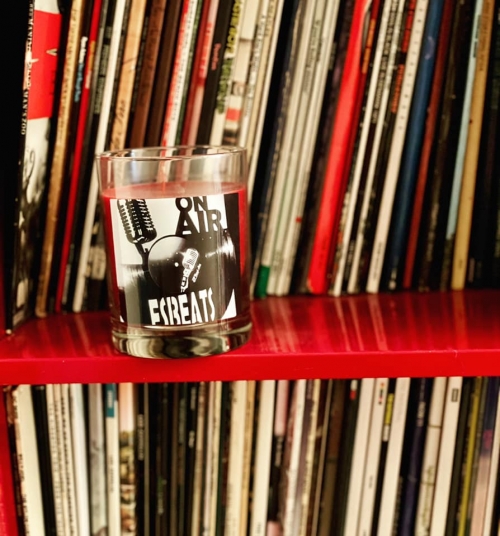 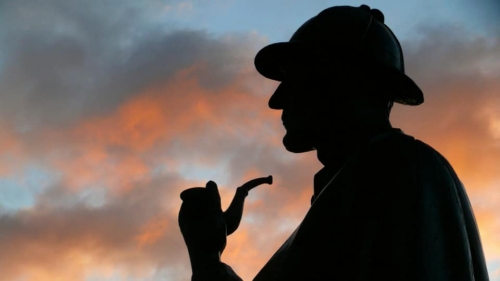 INVESTIGATES
April 10, 2021 2:00pm
download | permalink |
Esbeats
INVESTIGATES
Esbeats INVESTIGATES
Put on your best sleuthing hat; become a secret agent for the day with ESBeats: INVESTIGATES. Your mission, should you choose to accept it, is to enjoy this show. Warning, this podcast will self destruct in 2 hours and 40 minutes. 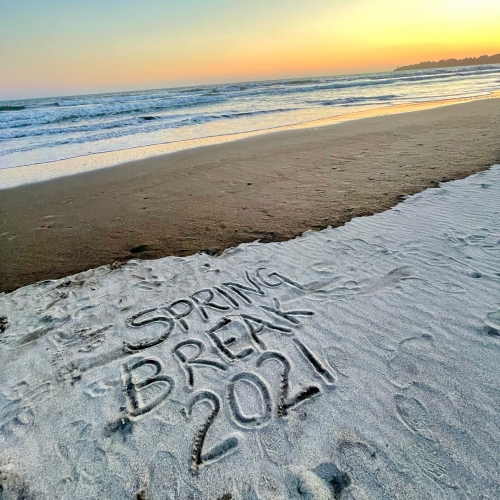 SUNSET
April 3, 2021 2:00pm
download | permalink |
Esbeats
SUNSET
Esbeats SUNSET
We took the mobile studio to Stinson Beach to bring you a special sunset edition of ESBeats. It was not without its own technical difficulties... after 49 minutes of troubleshooting, we got there. I eliminated the snafu portion of the show for the podcast. Enjoy! 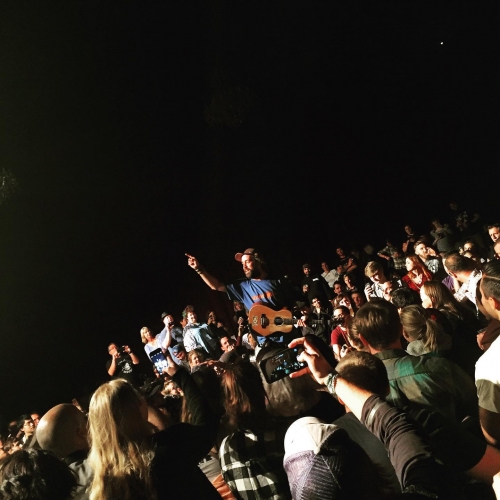 Venues - Part 2
March 27, 2021 2:00pm
download | permalink |
Esbeats
Venues - Part 2
Esbeats Venues - Part 2
We conclude our celebration of our favorite concerts at some of our favorite venues this week with a 3.5 hour extravaganza. We visit The Fillmore, Warfield, The Fox, Great American Music Hall and The Independent to name a few. Get your lighters out and singalong! Cheers! 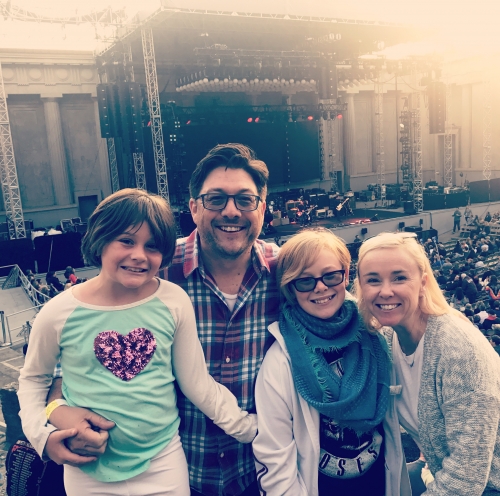 Venues - Part 1
March 20, 2021 2:00pm
download | permalink |
Esbeats
Venues - Part 1
Esbeats Venues - Part 1
We miss a lot of things since we've been sheltered in place for over a year now... but without a doubt, we miss live music the most. We thought we'd share music from some of our favorite shows over the years by celebrating the venues we experienced them at. Today we bring you 8 venues: 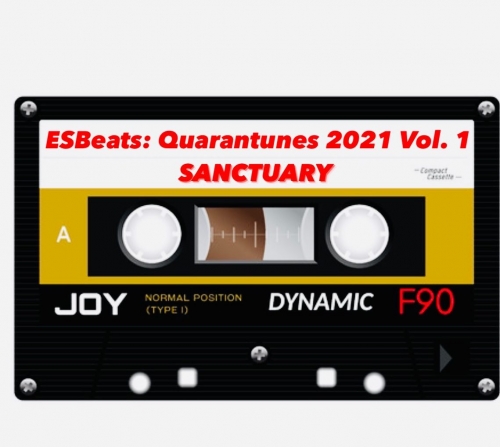 Ribcage by Elbow
East West Link by King Gizzard and the Lizard Wizard
Good Time by Esther Rose
Sanctuary by Hiss Golden Messenger
El Invento by Jose GonzÃ¡lez
Don't Assume What You Don't Know by Grace VanderWaal
Cosmic Fringes by Paul Weller
Paul by Cavetown
Eclipse by XIXA
Rent by Pet Shop Boys
State Hospital by Frightened Rabbit
Stay / Stay Meditation / You And I by Valerie June
All You Ever Wanted by Rag'n'Bone Man
A Message by Another New Thing
Endless Cycle by Lou Reed
It Is What It Is by The Antlers
Something Changed by Pulp
This Must Be The Place by Talking Heads
Seratonin by girl in red
Idler's Dream by Oasis
Maryland by Whitney K
The Revolution of Super Visions by Jane Weaver
Wise Up by Aimee Mann
Let Down by Radiohead
I Fuck Around by Melvins
Small by Clark
Bots! by Mush from Lines Redacted
Hills Of Mexico by Jake Xerxes Fussell
You Took My Breath Away by The Traveling Willburys
St. Francis Fountain by Virginia Wing
End of a Century by Blur
evermore ft. Bon Iver by Taylor Swift
Constellation by Chuck Johnson
Slow Graffiti by Belle and Sebastian
Mork n Mindy by Sleaford Mods
Morning Song by Jakob Bro 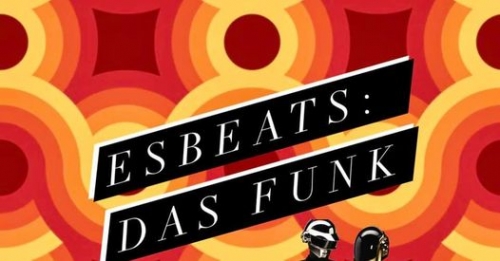 Das Funk!
February 27, 2021 2:00pm
download | permalink |
Esbeats
Das Funk!
Esbeats Das Funk!
Daft Punk is no more... so we hand picked some of our favorite tunes with a number of funkified inspirations for good measure.

Track listing...
Kasparov's Revenge by Lo Fidelity Allstars
Aerodynamic by Daft Punk
Digital Love by Daft Punk
Too Hot To Stop by Bar-Kays
Say No Go by De La Soul
Superstition by Stevie Wonder
Lose Yourself to Dance by Daft Punk
Must've Been by Chromeo (feat. DRAM)
Cut Dick by Mr. Oizo
Sure Shot by Beastie Boys
Hooked On You by Cerrone
Get Lucky by Daft Punk & Pharrell Williams
Pick Up The Pieces by Average White Band
Bond 77 by John Barry from The Spy Who Loved Me
Da Funk by Daft Punk
D.A.N.C.E. by Justice
Memphis Soul Stew (Live at Filmore West, 3/7/1971) by King Curtis
The Ghetto (Live at the Troubador) by Donny Hathaway
Purple Haze (Live at Brixton) by Groove Armada
Flash Light by Parliament
Kiss by Prince
If You Want Me To Stay by Sly and The Family Stone
Something About Us by Daft Punk
Daft Punk Is Playing At My House by LCD Soundsytem
Doin' it Right by Daft Punk ft. Panda Bear
Them Changes by Thundercat
Kelly Watch The Stars (Moog Cookboox Remix) by Air
Trampled Under Foot by Led Zeppelin
Good Times by Chic
Chameleon by Herbie Hancock 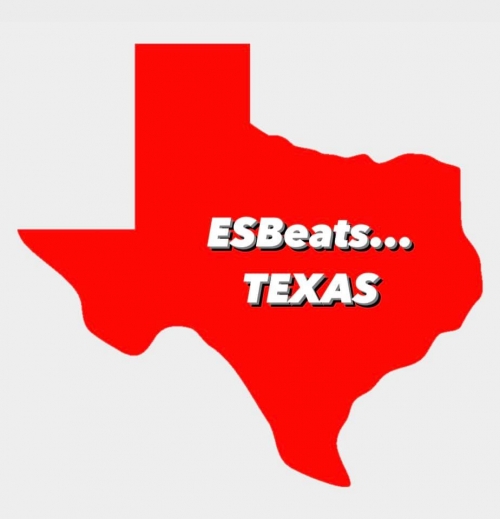 TEXAS
February 20, 2021 2:00pm
download | permalink |
Esbeats
TEXAS
Esbeats TEXAS
We have a lot of friends that have been through the ringer down in Texas this past week, so we thought we'd thaw them out with some Texas Tunes to warm them up. It's a Texas-sized show at 3 hours and 20 minutes. It took everything in us to wait until 4:20 before finally playing some Willie Nelson -- seemed only fitting. Enjoy! 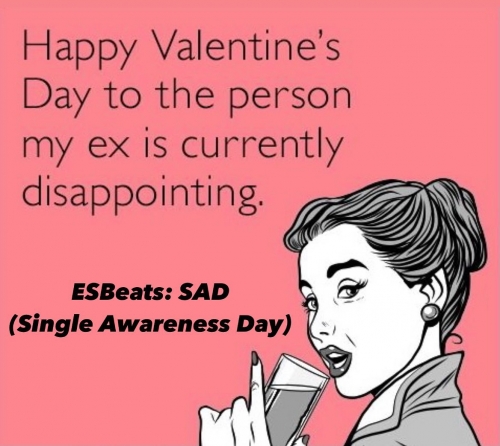 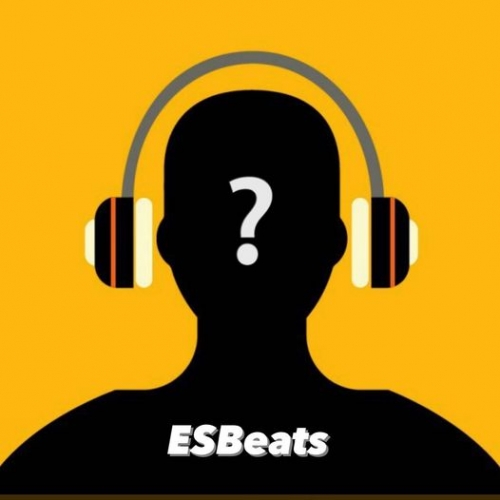 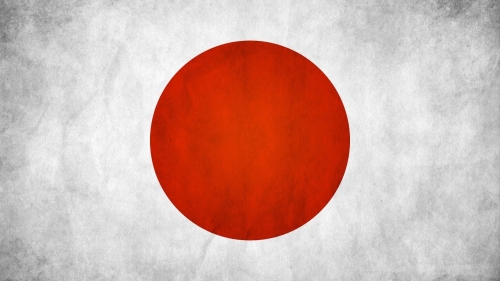 ESBeats: JAPAN
January 30, 2021 2:00pm
download | permalink |
Esbeats
ESBeats: JAPAN
Esbeats ESBeats: JAPAN
Konnichiwa! In these times of isolation and COVID, it makes it particularly difficult to imagine what life is like with the ability to travel. To address that wanderlust, we've been trying to take you to different locations - different escapes - to find a soul searching break from the routine and repetitiveness of home life. Ladies and gentlemen, ESBeats would like to welcome you to JAPAN! 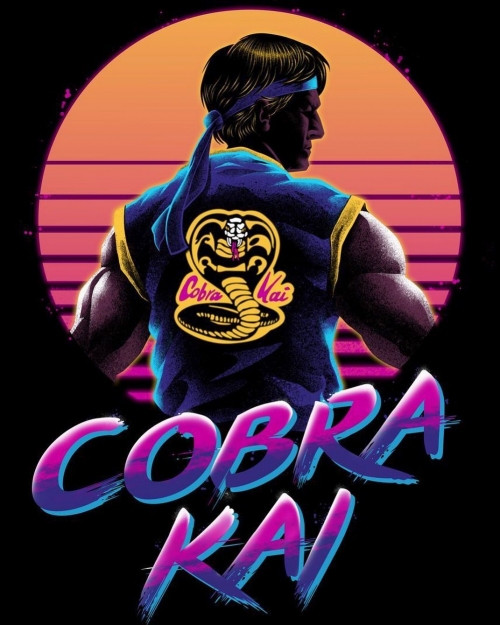 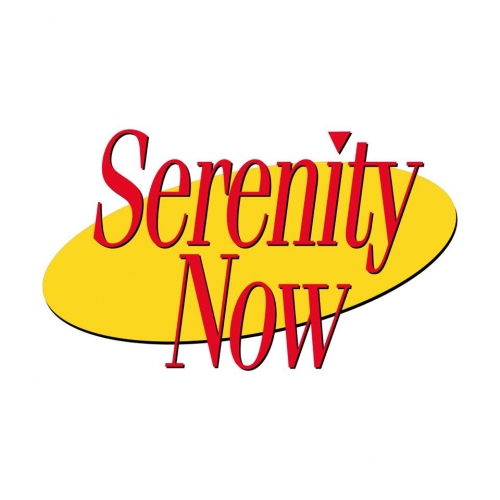 Water From a Vine Leaf by William Orbit

All Through The Night by Cyndi Lauper


Storms In Africa by Enya


Beyond by Daft Punk


Friend of Ours by Elbow


Moon River by The Sweetgreens


About Time Theme by Nick Laird-Clowes


A Lot of Livin' to Do by Pat Metheny Trio


Live to Tell by Madonna


All I Need (feat. Beth Hirsch) by Air

Holding Back the Years by Simply Red


A Question of Lust by Depeche Mode


Falling Slowly by Once Soundtrack


Sitting In The Park by Georgie Fame


New Theory by Washed Out


Love Is All by The Tallest Man on Earth


Lost for Words by Pink Floyd 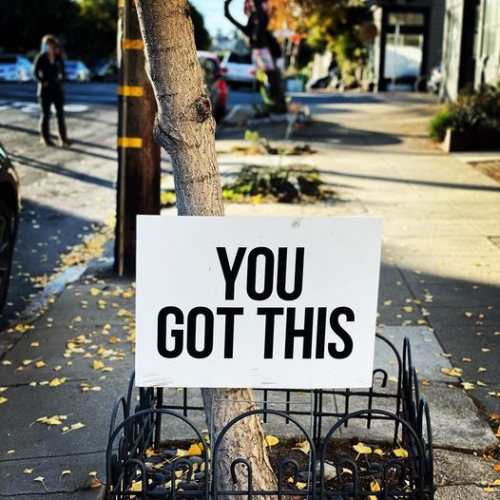 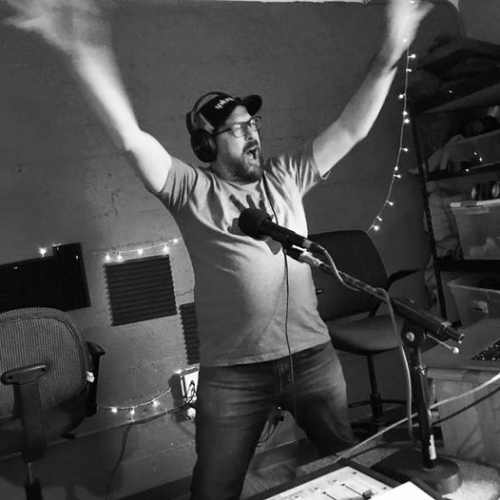 2:07pm: ESBeats: MIXTAPE - Goodbye 2020 All I Want Is You / Where The Streets Have No Name by U2 Live at Slane Castle DJs ESB, OriginalBrewer, Addimae and Q-Nut will explore every genre of music through unique perspectives as a family programming their own radio show. It\'s time to stick up a middle finger to 2020 and move on. Giddyup!

2:29pm: Return of the Mack by Mark Morrison

3:23pm: I\'ll Get You What You Want (Cockatoo in Malibu) by The Muppets

3:31pm: Be My Yoko Ono by Barenaked Ladies


4:11pm: I Left My Heart In San Francisco by Frank Sinatra

4:31pm: An Ocean Between the Waves by The War on Drugs


4:57pm: Breakout by Swing Out Sister


5:12pm: Let Forever Be by The Chemical Brothers


5:28pm: the last of the famous international playboys by morrissey


5:56pm: Together in Electric Dreams (12\" Extended Version) by Phil Oakey and Giorgio Moroder 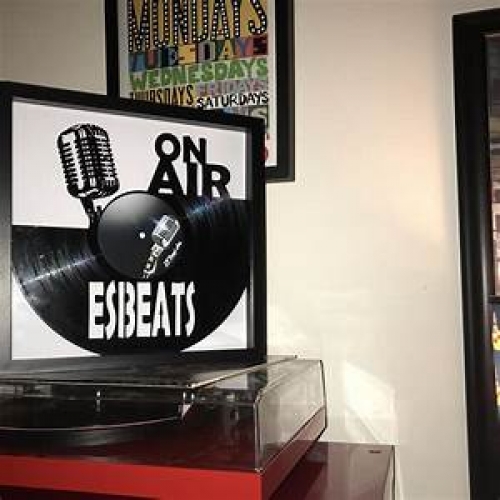 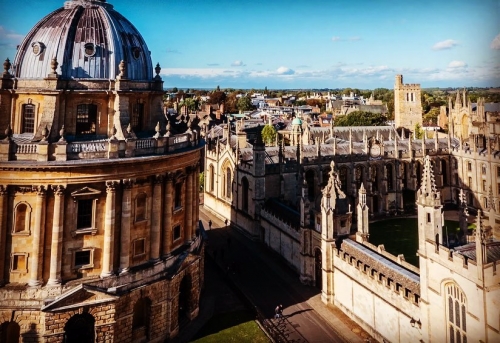 ESBeats: Oxford
December 5, 2020 2:00pm
download | permalink |
Esbeats
ESBeats: Oxford
Esbeats ESBeats: Oxford
In our ongoing travel series, this week we take you to Oxford. Anything and everything Oxford. Grab a pint of ale and the latest crossword and enjoy!