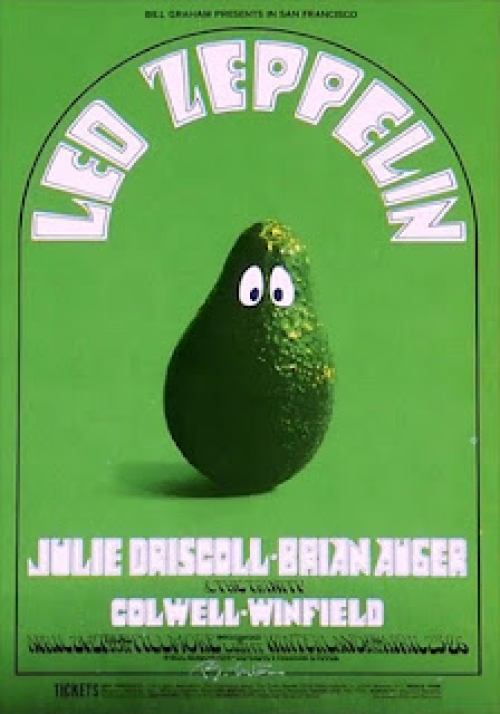 
Well if you host a live bootleg show and don't play Led Zeppelin from time to time, what the hell are you doing this show for at all? I mean really now?
When it comes to collecting bootlegs for the past 35+ years there are four bands that have always been the staple: Grateful Dead, Jimi Hendrix, Pink Floyd, and Led Zeppelin.


There are plenty of quality Zep soundboards making the rounds today, but back in the 80s when I started collecting, finding a really good soundboard was not easy. Most of the shows that were available (and most were on vinyl) were C-quality audience. I still own about 20 of these. Once the digital age began, and more peer-to-peer sharing and then with Bit Torrent we started to see many more quality soundboards.
And then there's the performance itself. Led Zeppelin was really hit and miss when it came to bringing it live. The early years are by far the most consistent, as they were building a name for themselves. By the time 1975 came around, many shows were lackluster (IMHO). Plant's voice couldn't stay strong through the entire show. If Page was feeling down, he would drown it in Jack Daniels and play sloppy. Jones and Bonham were always pounding away, but without all four bringing their all, it got down right embarrassing at times.

Not so with this show. 1969 was still early for this band who knew they had to prove themselves in front of the finicky San Francisco crowd. Hippies-be-damned, Led Zeppelin was going to show them all what a powerhouse band they were. And so they did.

This show comes just three months after the release of their seminal debut self-titled album. And what a way to introduce them to the world! This was their second US tour of the year, and the first shows of this important tour. They knew they had to win over the states if they were going to mark their place as rock legends. April 27th is the final show of this four show run. They would complete four tours of the US in 1969, closing out their final tour of 1969 in of all places, San Francisco.
I can't say enough great things about this show brought to you by these fabulous four youths on the verge of rock stardom. Love them or hate them, can you even imagine the rock genre if there was no Led Zeppelin? I don't even want to think about that.