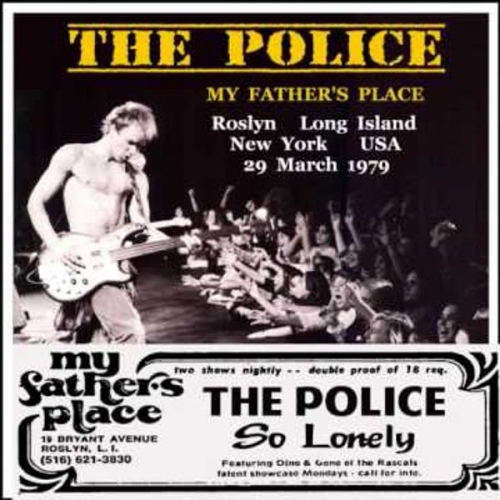 
Another week, another opportunity to share a few shows from my vast bootleg library. I have thousands of shows, from hundreds of artists, spread across dozens of genres. It can be a real challenge to what to share with you from week to week. I have a running list organized in genres, of shows I think you'll really enjoy, but there are weeks that I find a show that I really need to place at the front of the line. Tonight is such a night.
First up, The Police on their first North American tour! And this particular show, March 29, 1979 at My Father's Place on Long Island in New York may just be the best show of the tour! No kidding. It's super hot. And the club is small enough that you can feel the energy coming straight through your speakers. If you're a fan of The Police, you are going to want to crank this up. They're touring behind their first release, Outlandos D'Amour, released in November 1978. The hits are there. One track in particular is so well received they play it twice! Apparently they played it twice almost each show of the tour. HA! This was broadcast on WLIR-FM

Though The Police would normally be considered a headlining act, this is my show, so no go. Instead our headliner tonight is the one and only The Cramps! I've got this remarkable show from April 21, 1986 in Zurich, Switzerland. WOW! For those of you who know The Cramps, you know of their love for everything B-Movie. Perhaps this is why I love them so much, being raised on the "best" of the 50s and 60s B-movies by a father who had a real keen sense of humor. Thanks dad. There's also the double entendre era Cramps. Starting with their "A Date With Elvis" era in 1986, sexual double entendres would almost be exclusive in their songwriting, making it challenging for them to be able to find distribution in the United States, especially with titles like "Can Your Pussy Do The Dog?". Well, can it?
This show features Lux, Poison Ivy, Nick Knox and Fur (Jennifer Dixon, the first bassist to ever appear with them on stage).