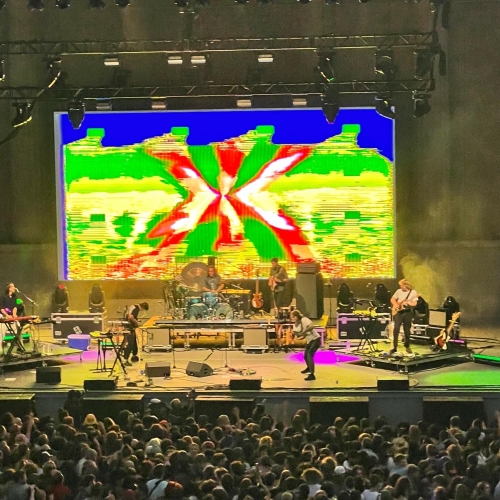 OK, let me tell you about last night. Holy Hell that was one Hell of an awesome show. And I have been to quite a few. Whew! I'm exhausted just thinking about it.

Two years ago my buddy of 30+ years, The Alchemist (Wednesdays 10-midnight on Radio Valencia), gifted me with a pair of tickets to see King Gizzard and the Lizard Wizard at The Greek Theater in Berkeley, only to have it postponed until last night! The wait was certainly worth it.
I've been into this band since "Flying Microtonal Banana" was released back in 2017, and I quickly got on the bus. Hey, I can be on more than one bus at a time! Between then and now I have purchased up everything they have released. OK, I think the only thing of theirs I don't have is "LW".

This band is on a completely different level; a different galaxy. Hell, a different UNIVERSE! The Gizz-verse!

The anticipation for this show was running high, and the line to get into the venue was long and a real

treat. Having to been to my share of shows at The Greek, I was confident we would do OK with seating, as long as I didn't have to suffer that damnable hill. I hate that hill. If you've been to The Greek then you hate it too.
I grabbed us seats center stage, five rows up from the soundboard! The sweetest of the sweet spots. And the crowd around us was better than you could ever ask for. A bunch of younger heads were right behind us. A few from Santa Cruz and their friends who flew in from Minneapolis. Shout out to Jamie, Alec, and Cameron. You guys were really great to dance with. There were a couple guys closer to our age right in front: CJ, and his buddy. It really reminded me of seeing the Dead in the 80s, when band was at a peak.


KGLW came out ready for the three hour marathon. I'm not going to write a show review, but I can tell you that the musicianship, along with the powerful lights and ridiculous video background, really allowed for a fully immersive experience; one I will not soon forget.
I've seen some really good shows lately, KGLW, Kikagaku Moyo, and OCees (Thee Oh Sees, OCS, etc, etc. etc.). The standards have been set pretty high. It's going to take a while to come down to planet Earth after this show.

Tonight, I'm excited to bring you highlights from their two weekends at Coachella, April 15 and 22, 2022, along with the complete Bonnaroo set from June 17, 2022. This a band that is doing what no one else is doing.

There was a saying in the world of the Grateful Dead: "They aren't the best at what they do, they're the

Enjoy and remember, there is no Planet B.