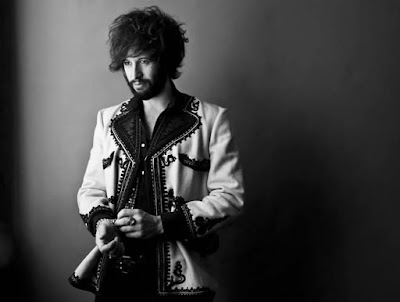 Born in France to Chilean & Mexican parents, Adanowsky can reportedly dance like James Brown and play guitar like George Harrison as he was taught each craft by the masters themselves – well, maybe not exactly.  Look past his “pedigree,” however, and you’ll discover a talented muli-instramentalist who made his breakthrough as a seductive heartthrob on 2008’s critically acclaimed El Idolo.

In his new album, Adanowsky abandons his “El Idolo” image for the much more romantic “Amador“ whose beautiful folk-inspired melodies and melancholic songs feel so emotionally honest that you too will wish you were alone and depressed.
Don’t believe me?  Stream “Dime Cuando” below:
In addition to music, Adanowsky appears to be following in his dad’s footsteps, a bit, as he also has been directing his own videos.  Check out his newest video “Un Sol con Corazon“
Radio Coyote with Sweet Jesus is broadcast live from the Mission District in San Francisco and can be heard on RadioValencia.fm every Friday between 2:00-4:00 (pst)
Please support these artists! Most of the music featured on the show can be downloaded for free through netlabels like Delhotel Records, or great music blogs such as Remezcla Musica and Club Fonograma.