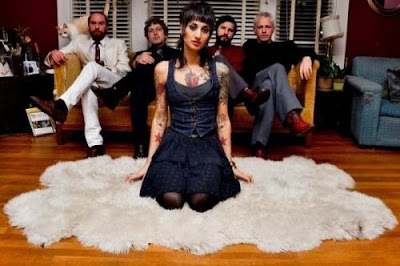 This week’s show features music by Y La Bamba plus an hour of some of the best alterlatino.

Y La Bamba is the brainchild of Luz Elena Mendoza out of Portland who has been building upon her musical heritage of growing up listening to the Mexican folk records of her immigrant parents by blending with the band’s other influences to create this vintage-dreamy-folk sound that is captivatingly deep.  The band’s subtle yet lush instrumentation is the perfect canvas to showcase Mendoza’s richly textured voice and her ability to authentically capture the emotion of her often deeply personal lyrics.

They are currently working on their new album, which I’m told is tentatively titled, Tragos Amargos, in honor of Mexican folk-legend Ramon Ayala.
As Y La Bamba continue to explore the depths of their sounds, expect many more good things to come from them in the immediate future.
Radio Coyote with Sweet Jesus is broadcast live from the Mission District in San Francisco and can be heard on RadioValencia.fm every Friday between 2:00-4:00 (pst)
Please support these artists! Most of the music featured on the show can be downloaded for free through netlabels like Delhotel Records, or great music blogs such as Remezcla Musica and Club Fonograma.