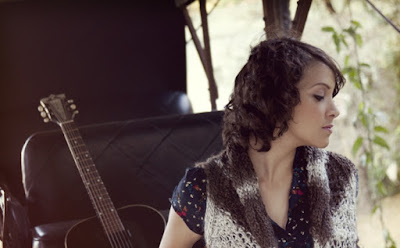 Gaby Moreno is a singer/songwriter from Guatemala City, Guatemala who, reportedly, first encountered the blues during a family trip to New York at the age of 13 and has been enamored with it ever since.  The vintage sounds of classic blues, soul, and R&B were so alluring to Gaby in her youth that she practically taught herself English through reading and learning lyrics to the songs she loved.  In recent years, she has won the 2006 John Lennon Songwriting Contest, was nominated for an Emmy for co-writing the theme song to NBC’s Parks and Recreation, and has had her music featured in numerous shows including: Lincoln Heights, Ghost Whisperer, The Hills, and Off the Map.
On her album, Illustrated Songs, Gaby combines these influential sounds from her youth with Latin music from the same era and is backed by what sounds like a very talented band.  Whether through her soulful attitude on “Mess a Good Thing” or her sweet vocals on a track like “No Regrets”, Gaby Moreno’s vocal and songwriting talents navigate the junctions of language and genres effortlessly.  That is an accomplishment that is difficult to achieve, and I think that Gaby has the grace, the skill, and the range to make it big!
Don’t believe me?  Then judge for yourself.  Check out his special rendition of “Mess a Good Thing“ she did for Silent Killer Productions:
Now that we’re all in agreement here — Gaby Moreno’s new album, Illustrated Songs, is available for a limited time for only $5 on Amazon by clicking here.
Radio Coyote with Sweet Jesus is broadcast live from the Mission District in San Francisco and can be heard on RadioValencia.fm every Friday between 2:00-4:00 (pst)
Please support these artists! Most of the music featured on the show can be downloaded for free through netlabels like Delhotel Records, or great music blogs such as Remezcla Musica and Club Fonograma.