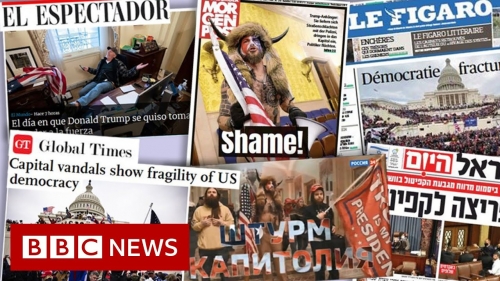 
Audio samples do not indicate an endorsement of viewpoints. In fact, if I have time, I think I might go back and retroactively edit the podcast. I feel like I gave perhaps too much time to the rantings of madmen and sore losers. I initially felt like it was important for people to hear what had been said, but now I think I gave too much airtime to people who can't do math.

I did have a lot of...perhaps "fun" isn't the right word, but I found some catharsis in assembling the many voices of this chaotic week. Give it a spin if you want to hear a LOT of voices, viewpoints, and opinions of one of the worst incidents in American history.

2:02pm: Sounds From The Trump Rally And Capitol Invasion by January 6th

2:20pm: "I Got Maced" by Elizabeth From Knoxville

2:31pm: The Man Who Sold The World by Simple Minds

2:33pm: A Clear Explanation of Q-Anon by The Q-Anon Shaman

2:34pm: Free Speech For The Dumb by Metallica

2:46pm: Excerpt 1 - The Last Word with Lawrence O'Donnell by MSNBC

3:00pm: Excerpt 3 - The Last Word with Lawrence O'Donnell by MSNBC

3:10pm: Trump Is A Flagrant, Toxic Narcissist by Bruce Springsteen

3:16pm: A Terrified President Throws His Riot Mob Under A Bus by Stephen Colbert

3:27pm: Cowards Never Lead From The Front by Steve Schmidt

3:38pm: How Would Police Respond If Black Lives Matter Stormed The Capitol by The 11th Hour MSNBC

3:43pm: How Would Police Respond If Black Lives Matter Stormed The Capitol by The 11th Hour MSNBC