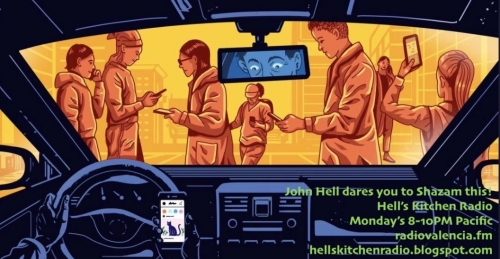 I don't have Spotify. Are you shocked by this new found knowledge? Did you think I got all of my musical inspiration from what Spotify suggests to me? I listen to radio. Non-commercial radio to be exact. KFJC, KALX, KPOO, KALW (on the weekends), WFMU, KPFA (especially Wednesdays 8-10pm). And I listen with Shazam close at hand.

There are times I have stopped the car so I can Shazam a track. How much do you love this app? However there are times when it's stumped. That's mostly when I'm listening to KFJC, the station that stumps Shazam! HA! That's when I call them up and ask them what the hell that just was that blew my mind?!?!?!

I don't think I stumped Shazam tonight, but I gave it the old internet radio try. My buddy Eric came by the house today with his bass and we rocked out to GFY, along with some other Amyl, Stooges, Flat Earthers, Butthole Surfers and Oh Sees tunes. That was super fun. I really need to get loud like that more often. So let's start with some Amyl and the Sniffers, shall we? There's also new music from David McMurray, Paul Leary, Angel Bat Dawid, and Kate Vargas. Also, Mudhoney's 30th anniversary remaster of Every Good Boy Deserves Fudge arrived on Monday, so I threw that in for good measure. Or good fudge.

There's something for everyone here, even you who still listen to the same music you've been listening to since high school. Don't be afraid. Dive right in. If you don't like what you hear, just wait 3-7 minutes and check out the next tune.