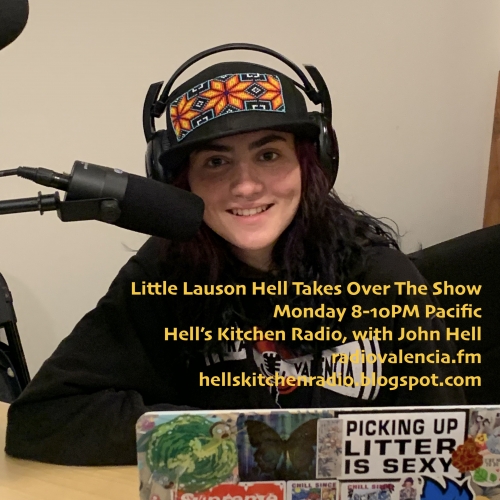 We kept the banter to a minimum, but the chat is as lively as the music. I tagged her choices with an "L".

Many people have asked me how she got her name? About 3-4 years before she was conceived, I had a dream where I was sitting in the back seat, passenger side, of my 1984 burgundy Olds Cutless Supreme. There was a seven year old girl in the front passenger seat, turned around looking at me. She had wild curly in the dream. I asked her name, and she said "Lauson. L.A.U.S.O.N.". She then appeared next to me on my left, with my arm around her. She was smiling at me, and I knew at that moment I was looking at my daughter.

I woke up and looked at my wife (now my ex-wife), and said "we're going to have a daughter named Lauson, L.A.U.S.O.N.". She replied "we're having kids?". That tells you all you need to know about my ex-wife. A few years later Lauson was born. We chose not to know the sex of the baby before delivery, but I knew it was going to be Lauson. Seven years later, it was that same face, that same curly hair, and that same beautiful smile that I cannot get enough of.

Her mother and I divorced when she was only two, sadly. And for too many years Lauson had to go back and forth between houses. But she has been with me, 100% for the past three. We're thick as thieves, she and I. I love that girl from the bottom of my heart. And I am so proud of who she is, heading into her senior year of high school. Time certainly does fly by.

Payback - The Final Mixdown: James Brown
I Should Not Think Bad Thoughts: X

SWEET/ I THOUGHT YOU WANTED TO DANCE: Tyler, the Creator ft. Brent Faiyaz and Fana Hues

Solar Power: Lorde
I'm In Your Mind/I'm Not In Your Mind: King Gizzard and the Lizard Wizard

Time Of The Season: The Zombies
We Gotta Get Out Of This Place: The Animals