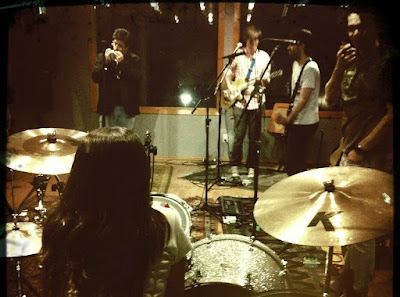 I opened the show with “Corres Deprisa” by this week’s featured artist Yellow Yesterday which is the brainchild of DF muli-instramentalist and song-writer, Andrés Ibarra Rios.   I was originally impressed by his talent when I discovered his debut self titled EP a couple of years ago on Poni Republic

Their second album, appropriately titled #2, is a much more clean and complex sound that still maintains the lo-fi folk sound that I liked so much on his first album.
#2 can be downloaded for free on their Bandcamp:
I also played a great Yellow Yesterday cover of Richie Valen’s “Come on Let’s go” found on the Ritchie Valens tribute album by (New Weird America) which is the continuation of Mexi Net Label (The Poni Republic) and you can also get this entire album featuring Radio Coyote favorites like Piyama Party, Joe Volume, and Apache O’Raspi for free over at nwla.tv
Radio Coyote with Sweet Jesus is broadcast live from the Mission District in San Francisco and can be heard on RadioValencia.fm every Friday between 2:00-4:00 (pst)
Please support these artists! Most of the music featured on the show can be downloaded for free through netlabels like Delhotel Records, or great music blogs such as Remezcla Musica and Club Fonograma.