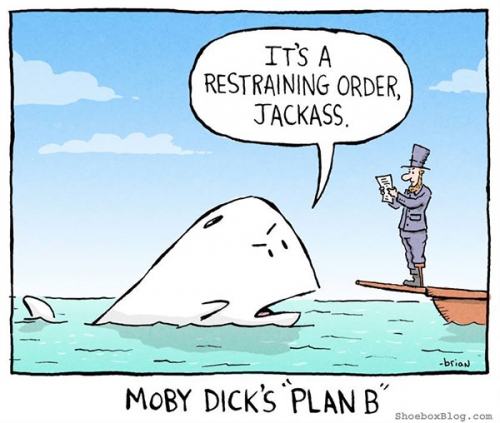 The white whale looms from the depths of your subconscious, haunting your distracted thoughts. It envelopes your sleepless nights growing larger , heavier, crowding out all other motivations and goals . The white whale is your obsession, nothing else matters, you focus on the white whale with laser guided precision. . What is this white whale, is it a force of good or evil. Perhaps the whale is neither, it is neutral and the good or evil is in how you act to attain your goal, to fulfill your obsession. What is your white whale?

On tonight's FINAL BROADCAST OF NOSE HAIR LINT GLAND, Karen "Ahab" Carpenter, Sherilyn "Queequeg" Connelly , Bob "Starbuck" Marc with the help of fellow crew members "Ishmael" KrOB and EXPLORE OBSESSION and those who sacrifice greatly to reach their own personal; NIRVANA.
All who stand in our way shall perish. Also, KrOB and Sherilyn pin the living shit out of the meters.

NOSE HAIR LINT GLAND: "For there is no folly of the beast of the earth which is not infinitely outdone by the madness of men."