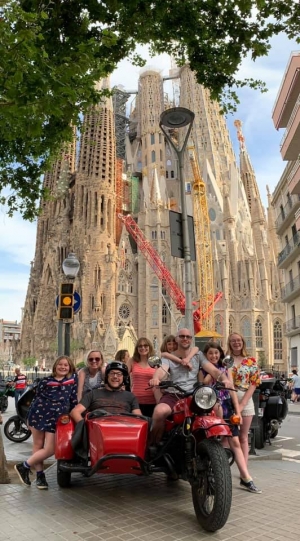 ESBeats: Spain
June 22, 2019 2:00pm
download | chatroom
Esbeats
ESBeats: Spain
Esbeats ESBeats: Spain
We're baaaaaaack! We had a whirlwind two weeks in Spain so thought it only fitting to pick our fave songs all about Spain. No kids this time. Just DJ Original Brewer and ESB to get us back into the swing of things. Enjoy!

Spanish Grease by Willie Bobo
You've Got a Friend in Me (para el Buzz Espanol) by Gipsy Kings
The Muppet Show by Los Muppets
Should I Stay or Should I Go by Los Fabulosos Cadillacs
Hotel California by Gipsy Kings
Spanish Bombs by The Clash
Daniel by Elton John
Spanish Castle Magic by Jimi Hendrix
Never Been To Spain by Three Dog Night
The Tallest Man on Earth by King of Spain
Barcelona by George Ezra
Boots of Spanish Leather by Bob Dylan
Concierto de Aranjuez: Adagio by Miles Davis
The Rain in Spain by My Fair Lady
Spanish Flea by Herb Alpert
Holiday in Spain by Counting Crows
Goodbye, Barcelona by Pokey LaFarge
We're From Barcelona by I'm From Barcelona
Barcelona by Freddie Mercury and Montserrat Cabalie
Letter from Spain by Electric Light Orchestra
Creep - Live by Tears for Fears
Sketches of Spain by The Pogues
Spain by Chick Corea