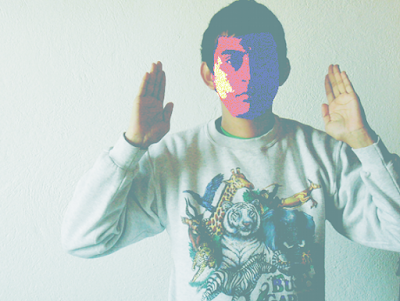 María y José is the brainchild of Antonio Jimenez out of Tijuana, Mexico who has been making quite a name for himself for his work with groups like Los Espíritus and Unsexy Nerd Ponies, but it is the music that he is making under María y José that I find the most innovative.  Part of this new DIY generation of music makers coming out of Mexico that are continually expanding and exploring the boundaries of fusing traditional and modern musical styles, María y José’s psychedelic and sample heavy sounds that incorporate nostalgic tropical-esque beats are ahead of their time.  His self released debut Espiritu Invisible was easily one of the best of 2010 and is destined to be a standard in defining the “ruidoson” genre.  If you’ve yet to check it out I strongly suggest you do – you can download Espiritu Invisible for free here.

His sophmore EP Kibosè and the Violentao EP (which contains remixes of the “mambo violento” first-single by Chico Ye, Sunsplash, Future Feelings and more) are available for free courtesy of Coco Bass.
While you’re waiting for the download to complete, have a listen to Puerto Alegria by María y José  (one of just many great songs available on Revista Plástica’s Plásticos y Etéreos Vol. 2 compilation)
And then check out the video for Granada below:
Radio Coyote with Sweet Jesus is broadcast live from the Mission District in San Francisco and can be heard on RadioValencia.fm every Friday between 2:00-4:00 (pst)
Please support these artists! Most of the music featured on the show can be downloaded for free through netlabels like Delhotel Records, or great music blogs such as Remezcla Musica and Club Fonograma.