Valentines day is tomorrow and my love is 3200 miles away. She’s been gone for two weeks. Her sweet, loving father just passed away from colon cancer. He was diagnosed two weeks ago. Get a colonoscopy everyone. It’ll save your life.

Anyway, I’m lonely and feeling a bit annoyed with the fact that the Hallmark LOVE holiday is here. So, I thought I would annoy you for two hours with loud “music”.

Also, what the hell is the deal with the Grammy’s? The only point to this show is for Clive Davis to sell more music. Really, that’s it. The best selling music of the year, as pushed by music promoters that do not live in the same town as the radio stations they are programming, is awarded, which then leads to more sales. I’m sure the artists can make a lot of money off of this, but most of it goes to the industry execs.

Did Adelle deserve all the awards she won? I don’t know. As far as the Grammy’s are concerned, sure. Why not? Who cares?

I do have a lot of respect for best new artist of the year, Bon Iver, as he told an excited audience that there are a lot of musicians out there that are more deserving than him. Amen, brother. Amen.

From the Washington Post article: “Those who did know the band praised frontman Justin Vernon for his humble acceptance speech. “It’s hard to accept because when I started to make songs, I did it for the inherent reward of making songs, so I’m a little bit uncomfortable up here,” he said. “I want to say thank you to all of the nominees, to all of the non-nominees that have never been here and never will be here, all the bands I toured with, all of the bands that inspired me.” ”

And KFOG sucks ass. Have you noticed how they’ve gotten worse and worse all the time? I mean how much worse can they get? They haven’t been good since they had Em Dung on doing the mornings with Scoop Nisker and Kevin the Rat, back in the 80s. for those of you who love Em, he’s on Radio Valencia, Sundays 10-midnight now. HA!!!!

Download it here.
Stream it here.
See all of my shows by clicking here.
Go to my blog here

Born to be Wild: Steppenwolf (In tribute to Paul Goerz. RIP)
Revolve: Melvins

Several Species of Small Furry Animals Gathered Together in a Cave and Grooving with a Pict: Pink Floyd
Hurry up and Wait: R.U.O.K.?
1: Porn~Merzbow
Feral: Tchkung

I Left My Heart in San Francisco: Tony Bennett

So it’s come to this, everything Karen Carpenter has been saying about me is apparently true. So, true to my word about being annoying, I’ll be playing very annoying free jazz, and experimental noise and feedback-style metal tonight. Don’t tune in, it’ll only cause you misery. 8-10pm Monday. 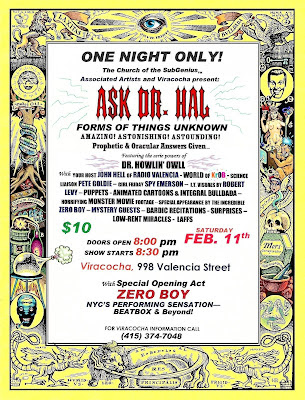 I’m proud to announce that I’m hosting the Ask Dr. Hal show this Saturday night, doors at 8, at Viracocha, 998 Valencia St., at 21st, in San Francisco.

From the good Dr.:

The Ask Dr. Hal! show is coming back– at a new location!
For the time being, we have parted ways with Chez Poulet and now offer our
February Preview Show at Viracocha, a cozy, tucked-away performance
space at 998 Valencia Street, the corner of 21st & Valencia.
We believe Viracocha is a good fit for our show, and that our regular &
expanding audience will enjoy its comfortable atmosphere and amenities.
And for this & future shows we’re reviving the older tradition of pre-shows
and opening acts.
The programme is planned to please– our first presentation of Ask
Dr. Hal! will feature NYC’s Zero Boy as an opening act.

Zero Boy
“Zero Boy is the Elvis of the onomatopoeia, a man who has taken a
Junior High school lunchroom skill and raised and refined it to high art.
No one can touch him at what he does, yet it is impossible to use words to
tell you what that is. He has been called a vocal cartoonist, but he is much
more like a vocal cartoon…
“While he has done heaps of radio (notably National Public Radio’s
Next Big Thing, where he’s had a regular feature called “Stump Zero Boy”),
his gift is not only aural but physical. Seeing him live is best. In a way, his
skill is cinematic. He uses his voice, hands and face to make your mind’s
eye see a picture… He has created an entirely unique theatre form.”
–Travalanche

Ask Dr. Hal! founded by Chicken John Rinaldi in 1998. A popular favorite for 12 years in varied cities & venues.
A legendary performance. Scientific. Educational. NOT for children & those easily shocked. A memorable night out.
“Ask & ye shall receive.” No refunds. Come on time to see the opening acts. Bill is long & we cannot delay curtain. Show
will end before Midnight. Do YOU have a variety act you would like to perform to open for us? Now taking submissions.
Telephone our booking office at (415) 642-6312. Viracocha information hotline: (415) 374-7048. WATCH Ask Dr. Hal! on You
Tube on the Puzzling Evidence Channel. HEAR Ask Dr. Hal! on San francisco’s best Pirate Radio station, listener-supported
Radio Valencia.FM

A Season in Hell #75: Radio Valencia: I’m Gonna Funk You Up! 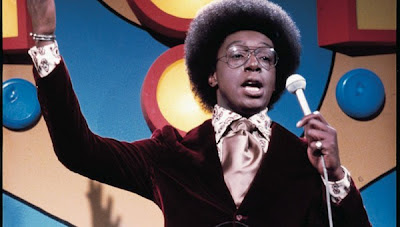 In tribute to Don Cornelius, I’m playing nothing but funk and soul tonight. I’ve got a lot of each.

It’s Hard to Be Humble: Mac Davis
I Feel Good: James Brown
Down on my luck: Wardell Howard

The Hands of Time: The Perfect Circle
I Call My Pussycat: Parliament

Pass the Peas: JBs
Can’t Fight The Feeling: Norwich Street Extension
Kick the Habit: Prophet Soul
I Who Have Nothing: Ray Frazier & The Shades Of Man
Going Down For The Last Time: Ronnie Keaton

We had a Radio Valencia meeting this afternoon. Lot’s of great work was done. We have a lot of amazing people working with our station. Be ready to hear more about San Francisco’s best radio alternative.

In the meantime, listen to us blather about our shows.