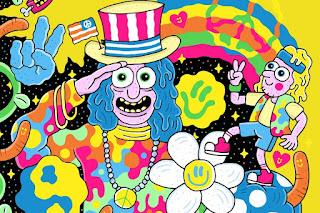 Stream these History, HERE!
Download the Memories, HERE!
Listen into all my shows here.
You can subscribe to my show through iTunes here.

I grew up wishing I had graduated from a San Francisco high school in 1964 so that by the Summer of Love in 1967 I would 21 years old and able to fully immerse myself in everything that era had to offer. It’s the music of that time that influenced me the most during my adolescent years, when I was moving past what played on the home hi-fi and more into discovering my own likes. It was that swirling psychedelic music and it was that message of change and opportunity that grabbed me most.

My family moved to the Bay Area in late 1982 when I was 12 years  and I knew right away what a special place San Francisco was. In our first excursion into the city my parents wanted to tour Fisherman’s Wharf, I wanted to go to the Haight. Of course by 1982 the Haight was long past its hippy prime and deep in its lost years of heroin and speed and closed storefronts. That didn’t stop me from searching this great city and colorful neighborhoods for any crumb that remained from the vibe that the Summer of Love hoped to propagate following 1967. Today the area is inundated by boutiques and way too many Tibetan importers and head shops; not to mention countless tourists, who, like me, are looking for a shred of evidence that there was once an energy of love that attempted to take our nation to a higher level, overcoming war and grief and capitalism. And let’s not forget the number of homeless teens and 20-somethings who have been termed out of foster care, who call the doorways of Haight Street their home.

It was the swirling music, colorful fashion, and risk-taking youth that took precedence at that time. It was the music industry that bastardized it and made way for the punk movement of the 70s/80s. But before

that all came to pass we have to appreciate what the bands of the time were doing. San Fransisco was one hell of a great scene. Great clubs, like the Avalon Ballroom, Carousel, Fillmore, Family Dog at the Great Highway had the bestbands playing their stages night after night. And promoters like Chet Helms and Bill Graham were pairing local rock bands with legendary blues and jazz artists, opening the ears of the audience to sights and sounds they may never have taken the time to check out on their own.

We are all better for 1967 and San Francisco.

“Summer of Love”, and David Talbot’s “Season of the Witch”. The latter starts in 67 and works its way up through the first 49er Super Bowl win in early 1982. Both are definitely worth your time, especially if you hold a place in your heart for San Francisco.

As for the music I chose for this show, it’s all from 1967, and most are west coast American bands. in retrospect I could have chosen more obscure acts from that year, or other, more current bands, covering these songs, below. Instead I played music that really moved me as I was growing up. And isn’t that the job of the DJ, to move you the way they have been?

My friend Linda Kelly, managing editor of the local rag Haight Street Voice was hanging out in the studio with me too. She was interviewing me for the August issue. It’s a free paper, so pick it up when you see it, or go online to check it out. I hope she doesn’t make me sound too bitter. It’s been a challenging year when it comes to my love for SF. But isn’t that like all relationships? We’ll see it through to the end.

Wednesday I had the chance to take in the Summer of Love exhibition at the deYoung Museum in Golden Gate Park. It was more than I could have hoped for. If you live in the Bay Area make sure you get to this show before it closes, August 20th.

Next Monday night is lots of new music and the return of Little Lauson Hell!!!

Omaha: Moby Grape
Season of the Witch: Donovan
Down on Me: Big Brother and the Holding Company

Astronome Domine: Pink Floyd
Being For The Benefit of Mr. Kite: The Beatles
Stroll On: Yardbirds
I Feel Free: Cream

I Was Made To Love Her: Stevie Wonder
Cold Sweat: James Brown
Before You Accuse Me: 13th Floor Elevators
Heroes and Villians: The Beach Boys

It’s A Happening Thing: Peanut Butter Conspiracy
Friday on my Mind: The Easybeats
I’m Waiting For The Man: Velvet Underground

What a way to start of the Summer of Love but with the quintessential Monterey Pop!!!